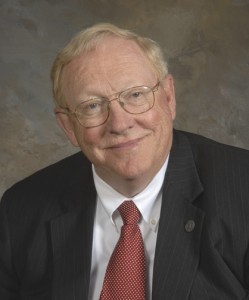 Hill served 27 years as leader of the Demopolis school system, from 1980 until his retirement in 2007.

Community leaders spent this week remembering Hill and reflecting on his almost three decades at the helm of Demopolis schools.

“He was able to see the big picture, but he still tended to the little things. He just had a unique ability to bring everything together,” Braswell said. “He was a tremendous leader.”

Hill helped create a solid financial foundation for the system and maneuver through federal and state mandates, like “No Child Left Behind,” Braswell said.

“He was fiscally very conservative and a genius at wrapping his head around some extremely large and complicated changes and implementing them,” Braswell. “He was a very classy and intelligent individual. He could relate to people very well. I learned a lot from him about education and people.”

Gary Holeman was chairman of the board of education during Hill’s last year as superintendent.

“He cared a lot about the school kids,” Holeman said. “It always would come back to what’s in the best interest of the kids.”

While the new Demopolis High School was completed during Hill’s tenure, the more recent Tiger Stadium and the arts center were all part of Hill’s vision for DHS, Holeman said.

“A lot of things started with him … the stadium, the track and arts center,” Holeman said. “Those were his long-term goals for the campus.”

Cecil Williamson was mayor and, before that, served on the board of education alongside Hill.

“He was always available to the city and attended many meetings that were not required of him. His input, whether questions or observations, was always appreciated,” Williamson said. “He always had a positive outlook. I never heard a negative word from him on anything.”

A funeral service will be held Saturday at 10:30 a.m. at Demopolis First United Methodist Church. Visitation will be Friday afternoon from 4:30-6:30 p.m. at Kirk Funeral Home in Demopolis.

In addition to his work in the school system, Hill was in the Demopolis Rotary Club and was a Paul Harris Fellow, the club’s highest honor.

“Dr. Hill’s word was his bond, and his word helped shape Demopolis into the community we all love,” Demopolis Rotary President Rob Pearson wrote in an email to members Wednesday.