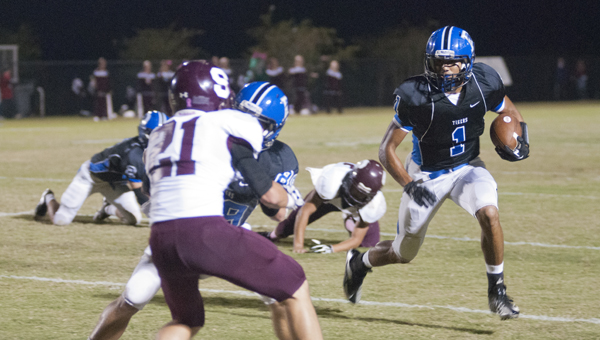 Demetrius Kemp follows his blockers against Satsuma. Kemp had two touchdowns in the game; one rushing and one receiving.

Demopolis defeated Satsuma on Friday in a rout to secure a Homecoming win and some momentum going into next Thursday night’s showdown with Jackson.

During the game, the Tigers defeated the Gators 49-7 and controlled the game throughout.

Demopolis got on the board first after a 20-yard touchdown pass from Oates to Cortez Lewis to take an early 7-0 advantage.

The Demopolis defense didn’t give up much all night and kept the ball in the hands of the Tigers offense for the majority of the game. 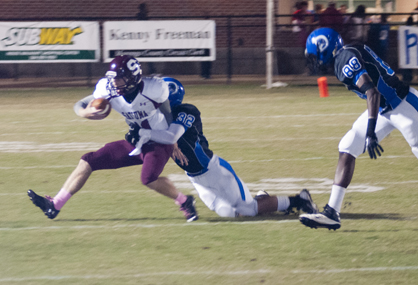 The Tigers’ second score of the game came on a six-yard touchdown run by Oates.

“Tyler played well tonight,” Demopolis head coach Tom Causey said. “He’s been doing a good job with his reads, and he’s played well for us over the last few weeks.”

After forcing another punt, Demopolis got in position to score again midway through the second quarter. A 65-yard pass from Oates to Kemp set the Tigers up with a first-and-goal from the six, and Oates ran in his second touchdown of the night from two yards out.

Demopolis got the ball back one more time before the half after a fumble by Satsuma’s Drake Mercer. Lewis forced the fumble, and Drew Jones recovered it for the Tigers.

Oates connected with Kemp for a 68-yard touchdown pass with under a minute to play in the half, and Demopolis took a 28-0 lead into the locker room.

At the half, the Tigers had outgained the Gators 280-89 in total yards.

Satsuma got the ball to open the second half and drove down the field for their only score of the night.

Reid Rials scored from seven yards out on a quarterback keeper to make the score 28-7. 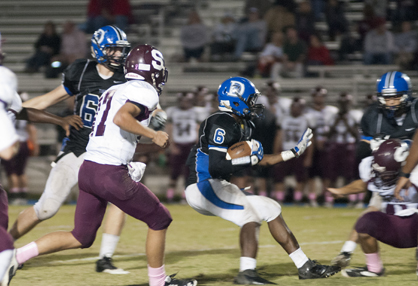 Roderick Davis looks for a hole against Satsuma.

“Our defense played well except for the start of the second half,” Causey said. “We’ve got to keep getting better.”

Kemp scored his second touchdown of the night on a 14-yard run to put the Tigers on top 35-7.

The final score of the game for the Demopolis starters came late in the third quarter on a 32-yard pass from Oates to Lewis to give Demopolis a commanding 42-7 lead.

Backup quarterback Logan McVay scored the last touchdown of the night on a 32-yard run.

For the game, the Tigers outgained the Gators 445 to 149 in total yards. Demopolis had 226 yards on the ground and 219 through the air.

Oates was 7-of-12 passing for 202 yards and three touchdowns. Lewis had his first 100-yard receiving game of the season with 123 yards on five receptions for two touchdowns.

Kemp led the Tigers on the ground with 78 yards on two carries.

The Tigers will host Jackson High School next Thursday night for senior night.