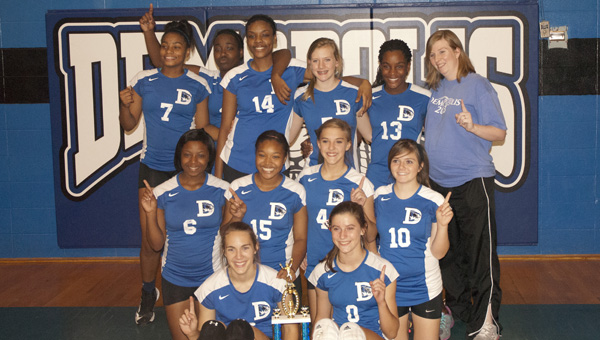 The Demopolis Lady Tigers won the Class 5A, Area 6 tournament Tuesday afternoon by defeating Greenville and Sumter Central. They will go on to the Super Regional in Montgomery on Friday.

The Lady Tigers defeated both Greenville and Sumter Central in straight sets Tuesday afternoon to win their second area championship in three years.

“We won it two years ago, but I think this one shows more about where we are going as a program,” head coach Blythe Smith said. “Our record was 7-10 when we won the first time, and we’re 14-7 this year. I’m really proud of the girls today.”

Demopolis throttled Greenville in the second set, jumping out to an 18-3 lead before winning the set 25-6. The third and final set was much like the second set, as Demopolis jumped out to a big lead early and held on to win 25-10.

Ivery Moore made some big plays at the net for Demopolis, and Jade Montgomery and Riley King both had strong serves in the match.

The second match of the day was between Selma and Sumter Central.

Selma led two sets to one, but allowed Sumter Central to get back in the match.

The Lady Jaguars forced a fifth set and came out on top 15-12, securing a spot in the final against Demopolis.

In the first set between Demopolis and Sumter Central, the Jaguars earned the first point, but the Lady Tigers went on a run with Montgomery serving and led 18-1 before giving up another point. Demopolis won the set 25-3.

The second set was tightly contested early on, but Demopolis was able to pull away after being tied 8-8, going on to win the set 25-13.

In the third set of the match, Demopolis jumped ahead 10-0 with Moore serving, but the Jaguars came storming back to pull within three points at 19-16. With Brianna Pruitt serving, the Tigers stretched their lead to 24-16 before finally earning the final point and winning 25-18.

“I’m really proud that the girls finished it off in three,” Smith said.

“That says a lot about them and the work they’ve put in this year. This is one of the best years we’ve had with chemistry and overall performance.”

Demopolis and Sumter Central will both advance to the Super Regional in Montgomery on Friday. The opponent has yet to be determined.