What I learned in prison 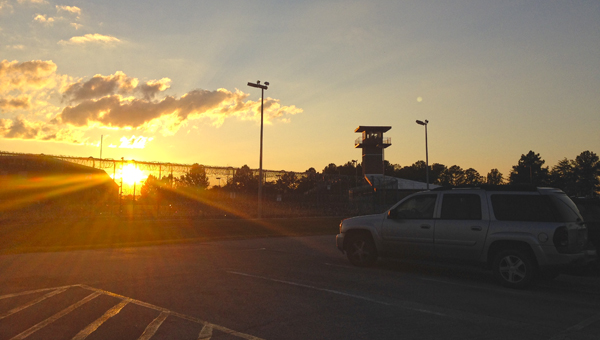 It’s a sound you don’t forget: the clang of metal hitting metal.

The clamor of the front gate at William E. Donaldson Correctional Facility closing behind me as I entered last Thursday still echoes inside my head. It was a cold, metallic and permanent rattle — the dying breath of lost freedom.

I had the experience of a lifetime this past weekend when I worked a Kairos Prison Ministry weekend with a group of Demopolis volunteers at Donaldson, a Level 6 maximum-security prison near Bessemer.

Most “experiences of a lifetime” are happy and long-awaited occasions, maybe trips like an African safari or cross-country motorcycle ride, or they are exciting like whitewater rafting or skydiving. You know … things on your bucket list.

Happy and exciting aren’t words most people would associate with time in prison, particularly an institution like Donaldson, where armed guards are perched atop high towers and, on the yard, high-voltage electrical fencing is sandwiched between two rows of razor wire.

It goes without saying that visiting such a place never was on any bucket list of mine.

But I can honestly say my four days at Donaldson were for the most part happy and exciting. Though I’d be lying if I didn’t say I wasn’t apprehensive, or even a little scared, when the gate closed behind me that first day.

My assignment for the weekend was that of assistant table leader. In that role, I sat for most of the weekend with a table leader, a member of the clergy and the same six men in white. During the weekend, they’re not called inmates or convicts or prisoners, they are simply described by the color of the jumpsuits they are wearing.

A couple of the men in white at my table kept saying, “You ain’t never been around nobody like us have you?” To which I always responded, “No, not like y’all,” which they got a kick out of.

All the inmates at the table were young black men, somewhere between 20 and 35. I don’t know what they all did to get to Donaldson and had I known I likely might have never come through the front gate.

Some of these young men — four of them within a year or two of my age —had already been in prison for going on 10 years. One of the oldest guys at the table, just 30 though, is soon to be in prison as long as he was free on the streets.

We had a good time at my table, too good of a time Thursday and Friday. A good portion of the weekend, when you are not singing or eating the thousands of cookies volunteers baked, is spent in talks, mediation and table discussion.

These talks cover everything from the power of choice to forgiveness to how to live a spiritual life. After each, there is a period of group discussion that follows. The first couple of days my guys wanted to talk about women, football, food and — well, that’s about it.

By Saturday and Sunday, our talks got much more real and honest. Most of them, though not all, acknowledged that they are at Donaldson because of the choices, the bad choices, the repeatedly bad choices they made. I think some of the men in white made serious breakthroughs on understanding that choices have consequences and that we have to accept responsibility, quit passing blame and making excuses for the dumb decisions we make.

So it was a happy weekend and exciting in some ways, but it was also one that was heartbreaking. I’ll admit I teared up a few times Saturday and Sunday, but like most of the inmates I didn’t really let my guard down enough to cry in public, but, let me tell you, when I got home Sunday night I cried like a baby.

Let me be clear, these guys committed crimes, many of them horribly brutal, and do have a debt to society. Virtually all of them deserve the sentences they have. The choices they made hurt a lot of people, their victims’ families as well as their own.

But most of them never had a chance.

I don’t think any of the guys at my table had a father or positive male influence in their life. Most said they have never had another man tell them that they love them.

One guy at my table was living on the streets as a teenager, said his mother’s boyfriends regularly beat him and, at age 10, the then fifth-grader had to beg for his life when one put a gun to his head and threatened to shoot him.

Some of them were raised my grandmothers because mom was doped up, locked up or worse. I can’t imagine what it must feel like to never know a mother’s love.

It’s a vicious cycle without end. Remember, the 30-year-old at my table, the one who has been in prison almost as long as he was outside? His dad wasn’t ever in the picture. That inmate went to jail early as a teen, but before doing so, he fathered a child at 12. Twelve years old. His boy is now about 16 and is in juvenile lockup himself.

What about the other boy who had to beg for life at the hand of mom’s boyfriend? That 10-year-old will turn 23 in November serving a life sentence. The only thing he wants for his birthday is to meet his 3-year-old boy for the first time.

The motto of Kairos is “Listen, Listen, Love, Love.” I listened to these guys. As a newspaper reporter that wasn’t too hard for me. I listen to people every day for a living. I also tried my best to share God’s love with them.

That proved much harder. The men in white don’t know how to be loved, how to accept unconditional love. It’s a foreign concept. For the most part, they’ve never had anyone love them without expecting something in return. They’re “loved” by their homies, their gang members, and their partners in crime. Understandably, they don’t trust many people. How can you when trusting somebody might get you backstabbed if not literally stabbed in the back?

I’ve heard Ben Sherrod, who has been working in Kairos for 25 years, say it’s addicting as any drug. And I really feel like I got a lot from the weekend for my own spiritual journey.

There will be a reunion in November for this Kairos group. Sherrod may be right about the addiction because I’m looking really forward to that, but, even if I wasn’t, I don’t think I have a choice about whether I can go back or not.

I had two of these guys, these men who have never had another man tell them they love them, who can’t trust anyone, who have only been repeatedly let down, ask me if I’d be back for the reunion, if they would ever see me again.

How can you say no to that? I’d be just another person who abandoned them. As an ambassador of Christ, I’ll be back at that reunion unless I’m in a coma. I told them that was up to them but I would be there regardless. So I guess I’m stuck, at least for a while.

But we are humans and in our frailty, we do hurt people. A major focus of the weekend was forgiveness. These man in white have been hurt a lot by mothers and fathers, girlfriends and wives … they have a lot of perceived wrongs, maybe a few justifiably so, with the court and correctional systems. But the No. 1 person each needs to forgive is himself.

First John 1:9 says, “If we confess our sins, he is faithful and just and WILL forgive us our sins and purify us from all unrighteousness.” We talked about that verse at length on Sunday.

God doesn’t have some hierarchy of sin. He’s not tipping some scale way beyond the blue saying, “Oh, you’ve reached your sin limit … I can’t forgive you.” The men in white struggle with that. They think their sins are too great. They feel like they don’t deserve to be forgiven.

But you know what? Neither did you or I!

Another verse we talked about several times was Romans 3:23, “For all have sinned and fall short of the glory of God.” That ALL includes everyone in that prison chapel, those in white and those in street clothes.

So what do I take away from this Kairos weekend? I think I have a much better understanding of the struggles inmates face and really most have since the day they were born. I might have picked up some prison slang along the way.

I hear people say a lot that prisoners are exactly where they should be, and, like I said, I agree with that in many ways. Choices have consequences and debts must be paid, but I also hear people say things like, “Just hang them or fry them and save us a bunch of money.”

I’m glad God doesn’t judge me, a sinner, by that same manner because I would be there with them.

We all sin, we all make mistakes. We’re human. In the same regard, we can all grow in our relationship with God. I’m not the same person I was at 16 or 26, or after Kairos, even six days ago. Yes, if freed, many of these guys would go out and do the same kind of stuff that got them into Donaldson in the first place. But not all would.

Some are growing and will continue to as long as we don’t give up on them, as long as they aren’t abandoned again.

They can change as long as there are people like “Big Ben” Sherrod as he is called at Donaldson, John David Barnes, Mark Bedsole, Michael Lynch, Willie Slay, Brandon Smith, Rebecca Culpepper and Daphne Glaser who are fulfilling the commission Christ gave all of us, that being to go out into all the nations and corners of the world and preach the Gospel, even the little chapel at Donaldson Correctional Facility in unincorporated Jefferson County.

I learned this weekend who the typical criminal is. He’s not black or white, tall or short, big or small. The criminal I got to know best, the one who needs forgiveness the most, was a white guy though, about 5’10, brown hair and eyes, had a beard … I saw him this morning in the mirror.