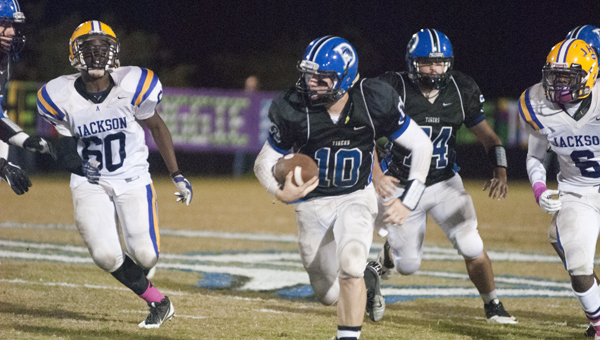 Demopolis quarterback Tyler Oates rushes against Jackson. He had 100 yards on 18 carries in the game.

A gritty and gutsy performance by Demopolis High School and the senior class came up just short Thursday night against Jackson High on Senior Night.

The Tigers gave the Aggies all they could handle, but just weren’t able to come up with a stop late in the game to seal the win.

“I’m proud of our guys tonight,” Demopolis head coach Tom Causey said. “They played their tails off. Jackson just made one more play than we did. Our seniors played hard all night. That’s the way you want to play on Senior Night.”

Demopolis took a 21-14 lead over the Aggies with 2:49 to play in the game on a 20-yard touchdown run by Roderick Davis. Tyler Oates connected with Peyton Pearson for the two-point conversion to put Demopolis up 7, but Jackson still had more than enough time to drive down the field.

Jackson quarterback and Georgia Tech commit Matthew Jordan connected with Marcuz Gilmore on three straight passing plays to get the Aggies down to the Demopolis 4-yard line. Demopolis’ defense made three big plays, including a tackle for loss by Pearson to force Jackson into a 4th-and-goal from the 11 yard line. Jordan connected with Gilmore again for the 11-yard touchdown to pull within one. Jackson went for two, and Jordan escaped a sack and scrambled into the endzone to give Jackson a 22-21 lead with under a minute to play. 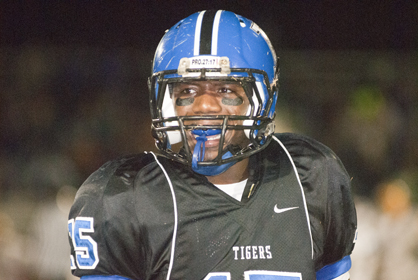 Demopolis got the ball at their own 25 yard line with under 40 seconds to play. Oates connected with Demetrius Kemp for a 15-yard gain on the first play of the drive, but four straight incomplete passes sealed the win for Jackson.

“Our offense didn’t quit, and Marcuz came up with some great catches on the last drive,” Jackson head coach Danny Powell said. “My hat’s off to Coach Causey and Demopolis tonight, though. They played their tail off.”

The first quarter of the game ended in a scoreless tie with some mistakes from both teams. Kemp came up with a blocked punt to give Demopolis the ball at the Jackson 37, but on the first play of the next drive, Christopher Taylor picked off an Oates pass to give the Aggies possession.

Two plays later, Jordan fumbled and Tyler Perkins recovered to give Demopolis the ball at the Jackson 45. The Tigers were forced into a three-and-out, and were unable to capitalize on the good field position.

Jackson got on the board first in the second quarter on an 18-yard pass from Jordan to Antonio Fox, but the extra point attempt was no good, and the Aggies led 6-0. 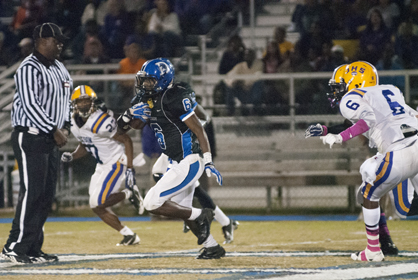 Roderick Davis finds a hole against Jackson. He ran for 104 yards and a touchdown on 17 carries in the game.

The Tigers’ next drive stalled out, but Kemp came up with a big interception for Demopolis. He returned the interception 50 yards down to the Jackson 22. Jackson’s defense held strong and forced a 38-yard field goal attempt by the Tigers. Demopolis kicker Leif Midgorden split the uprights to cut the lead in half with 3:59 to play in the half.

Later in the quarter, following a Logan McVay interception, the Tigers were set up with good field position at the Aggies 30 yard line. Demopolis drove down to the 10, but the drive stalled, giving Midgorden another field goal attempt, this time from 27 yards out. With 5.4 seconds left in the half, the kick was good and the score was even a 6-6 at halftime.

Both teams traded possessions in the third quarter until Oates connected with Cortez Lewis for a 50-yard touchdown. The extra point was good, and Demopolis took a 13-6 lead over the Aggies with 3:15 to play in the third.

Jackson drove down the field, with many of the yards coming from the scrambling ability of Jordan. With 9:54 to play in the game, Jordan crossed the goalline on a 4-yard TD run. The Aggies failed the ensuing extra point attempt, but Demopolis was called for a penalty, and Jackson was given another chance. With the do-over, the Aggies went for two, and Jordan ran it in to take a 14-13 lead. 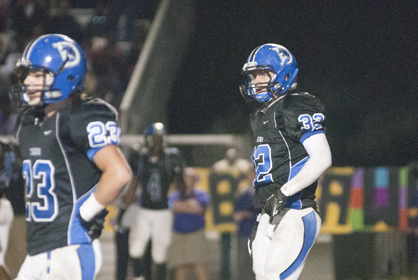 Peyton Pearson had 7 total tackles and a pass break up in the game.

Demopolis goes on the road next week to face Hillcrest in Tuscaloosa, and Jackson will host Thomasville in their regular season finale.