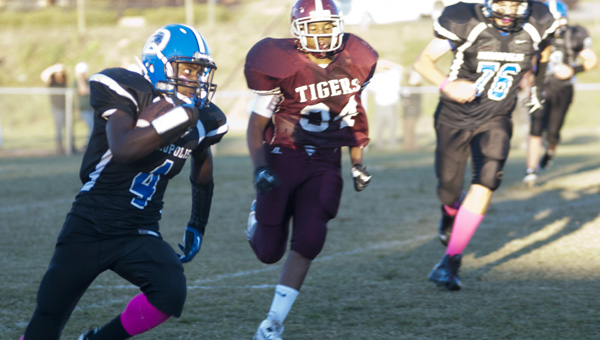 Anthony Jackson breaks a run to the outside against Thomasville.

The Demopolis Middle School Tigers finished the 2013 season without a loss and were named Highway 43 Champions by finishing the season with the best record.

The Tigers finished 7-0, and they outscored their opponents 202-26 in those seven games.

DMS head coach Jeremy Silcox said the success of the team was due to the players playing as a team.

“We were always team-oriented,” Silcox said. “The players never put on person ahead of the team. We knew we had the athletes to be successful, but playing as a team was a key to our success.”

He added that the players began their hard work in the spring and carried that work ethic over into the fall. 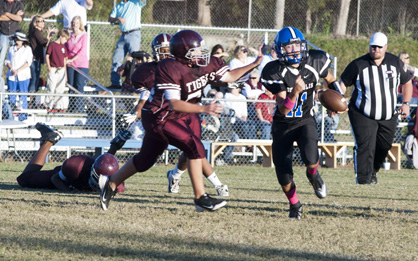 Silcox said he knew this was a special team before the season even started.

“I knew we had a special team,” he said. “We had some really good athletes, and we had some kids that really worked hard. It was really apparent after the first couple of games, and we really started clicking. They always had the hard work ethic throughout the season. Our entire defense was phenomenal all year long. They only gave up 26 points in seven games.”

Many of the 8th-graders on the team will go on to play at the high school level next season, and Silcox said he believes they are as prepared as any 8th-grader can be.

“We had a really good group of players and coaches this year, and we had great support from the community throughout the season. Demopolis is always solid on tradition, and the support from everyone helps carry you through the season.” 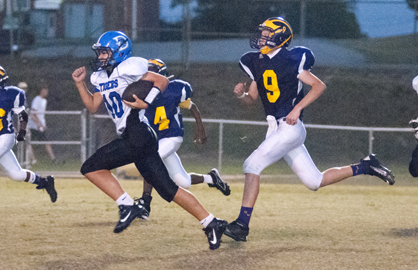 Demopolis High School head coach Tom Causey said the success of the middle school, and even the youth league, breeds success at the high school level.

“Right now, from the youth league on up, our teams are winning,” Causey said. “When an athlete or student moves up that is used to success, that breeds success at the next level. It makes the school and the program better.”

The following is the results from the DMS season: