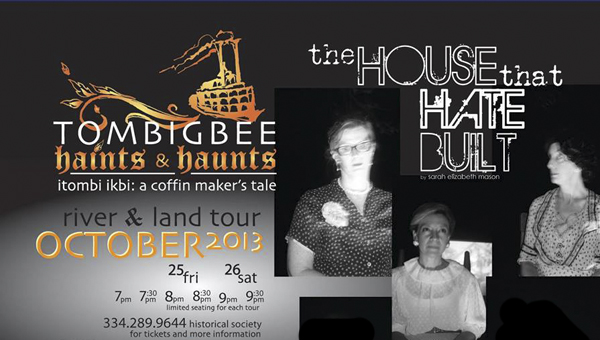 This year’s Haints and Haunts will be put on Friday and Saturday night and is based on the book “The House That Hate Built.”

A Halloween tradition, the Tombigbee Haints and Haunts, is back this year with another journey into the darker side of the City of the People’s past.

This year’s production is based on the book “The House That Hate Built” by Demopolis native Sarah Elizabeth Mason and will be put on Friday, Oct. 25 and Saturday, Oct. 26. Tickets are still available for both nights.

This year’s production is a little different than past performances. In previous years, those who dare to go on the boat and hay ride tour heard local story tellers share tales about real people and incidents from the city’s long history.

While Mason’s book has a kernel of truth to it and is based on a local family feud, she took creative liberties in her story about greed and jealousy and Southern family dynamics.

The fifth annual ghostly tour introduces you to the Clark family. When Margaret Layton moves to the fictional town of Monroe and marries the bank president, James Clark, she thought her life couldn’t get any better. Well, let’s just say Margaret’s new husband’s family is less than hospitable.

The river tour will take passengers from the City Landing up river as a storyteller narrates the journey. Passengers will return to land where they will load a hay ride that will wind through the historic streets of Demopolis where the mystery unfolds.  Pay attention, just when you think you know who did it, the story takes a unexpected turn.

Each tour will last an hour. Remember, the entire show is outside and partly on the river, so dress accordingly.

The Marengo County Historical Society, Canebrake Players and the U.S. Army Corps of Engineers all sponsor the event. Kirk Brooker is directing the production.