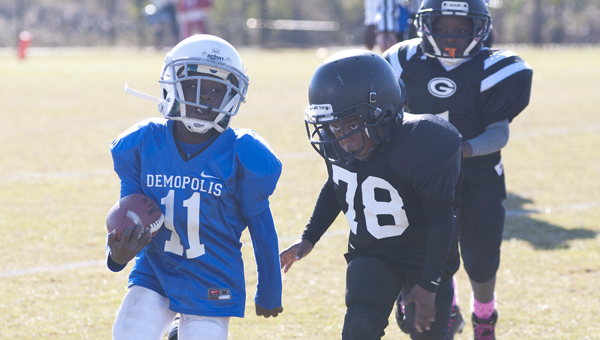 Christopher Baitey runs for the Demopolis 7/8 year olds. The Rookies fell to Greensboro 7-6.

All three Demopolis Youth Football League teams were in action Saturday morning at Tiger Stadium at Demopolis High School for the second round of the West Alabama Youth Football Association playoffs.

The 7/8 year old Tigers played strong throughout the game, but Greensboro made one more play than Demopolis to earn a 7-6 win, eliminating the Tigers from the playoffs. 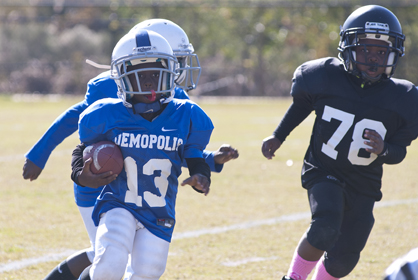 Mason James scored the only touchdown of the morning for the Demopolis 7/8 year olds.

The Tigers only score came on a 46-yard run from Mason James in the third quarter. The extra point attempt was missed, and the Tigers weren’t able to find the endzone again.

Dexter Boston and Ja’Tayvon Scott both had big plays defensively in the game for Demopolis that helped keep them within striking distance.

The Demopolis 9/10 year olds shut out Central 26-0, with all of their points coming in the first half. The Junior Tigers defense didn’t allow Central to threaten, and came away with the win to advance to the next round of the playoffs. 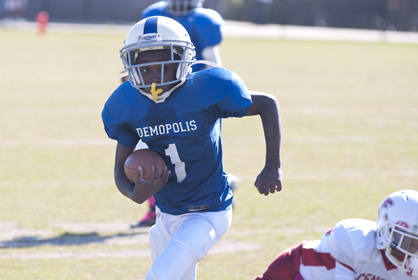 Peyton Stevenson broke a 40-yard run on the Tigers first drive, but it was called back because of a block in the back on the run. Timothy Thurman was able to finish off the drive, though, with a 29-yard touchdown run to put Demopolis on top 6-0.

Thurman added his second touchdown of the morning on Demopolis’ next drive, this time from 33-yards out. Stevenson connected with Jataurrean Jones for the two-point conversion to put Demopolis up 14-0.

On the Tigers next possession, Thurman broke his third touchdown run of the day from 45 yards out to put his team up 20-0. 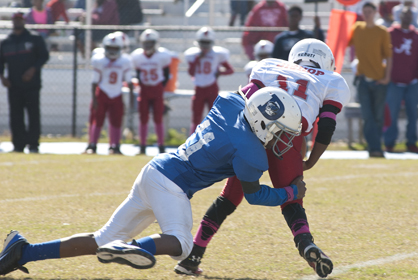 The final score of the game came with 22 seconds left in the half. Jones ran it in from 29 yards to give Demopolis a 26-0 lead, which proved to be the final score. C.J. Sandridge had two fumble recoveries in the game for the Tigers.

The Demopolis 11/12 year olds opened their game with a score on their first drive, but Central responded and ultimately won the game by a score of 20-14.

Central responded on their first play from scrimmage with a 58-yard touchdown run. They failed the extra point attempt and Demopolis led 8-6. 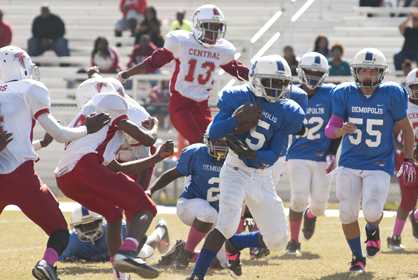 Central took the lead on a quarterback sneak early in the second quarter to take a 12-8 lead.

Demopolis got the lead back on a 55-yard pass from Antonio Besteder to Alexander Besteder. The two-point conversion failed, and the Tigers led 14-12 going into halftime.

Central drove down the field to open the third quarter to take a 20-14 lead, and Demopolis was unable to respond.

The Tigers threatened late in the fourth quarter, and got down to Central’s 3-yard line, but they were unable to convert on fourth down.