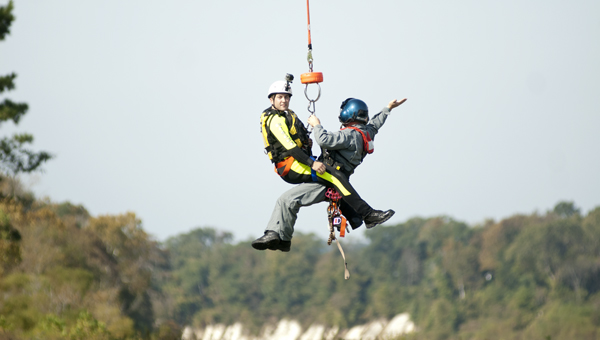 A “victim” was airlifted to an area below the Demopolis dam so he could be rescued during swift water rescue training Tuesday.

Demopolis Fire and Rescue and several other departments from the area participated in a swift water training day at Lower Pool Park in Demopolis on Tuesday.

The Department of Public Safety Aviation Unit, Calera Fire and Rescue, AMSTAR and the U.S. Army Corps of Engineers worked with Demopolis Fire and Rescue to simulate different scenarios of victims stranded below the lock and dam.

“Our main goal with this training is to make contact with other emergency people we need for swift water rescues,” Demopolis Fire Chief Tommy Tate said. “We’re working through some different scenarios to be comfortable working together and making sure we’re able to make these rescues as quickly as possible when things like this happen.” 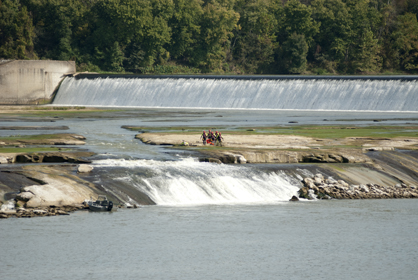 Responders reached the “victim” and are carrying him back across the water to the helicopter to be lifted back to safety.

On Sept. 1, a boater went over the dam and was stranded on some limestone rocks in the middle of swift water. It took first responders nearly three hours to reach him.

Tuesday’s training was meant to help deal with those type of situations faster and more efficiently.

The scenarios conducted included crews rescuing a “victim” by crossing the water on foot, crews being dropped from a helicopter to make a rescue, a nighttime simulation and also a simulation of a hunter being stranded in the woods.