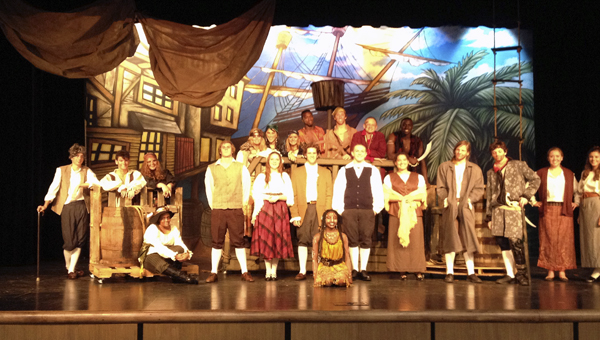 The Tiger Arts Guild will perform Treasure Island Friday, Nov. 1 through Sunday, Nov. 3. Shown are the cast and crew members.

Pirates will take over Demopolis High School for this weekend.

The production is an adaptation of Robert Louis Stevenson’s book, “Treasure Island.”

“It’s a well-known play, but our version is scaled down to about an hour,” said Jody White, director of the Tiger Arts Guild. “We have a wide variety of students involved, and they’re doing all the work in the play from the sound to the lighting to the acting.”

White added that the play is adventurous with humor mixed in, and that it will be fun for anyone to see.

“If you love pirates, you’ll love the show,” she said. “It’s entirely student-driven. We have a beautiful set, and the students have worked hard to get ready.”

The set was designed by Garland Farwell with the help of students in White’s Theatre II class.

“He helped design the backdrop for us,” White said. “He gave the students several lessons in design, and he came up with three designs from what the students made. There were three phases of drafting the final backdrop, and the students were involved in it every step of the way.”

Farwell is an artist that lives in Sumter County, but he has worked as an artist in New York in the past.

“We’re lucky to have him assisting us,” White said. “He’s a true professional.”

The cast and crew for Treasure Island is as follows:

•Carley Wrensted and Morgan Saliba in charge of makeup

•Kathleen Saliba in charge of lights

•Nick Vann and Natalie Saliba in charge of sound