Suspect in second Saturday shooting turn himself in

Christopher Banks, who was wanted in connection with a shooting Saturday, has been arrested. 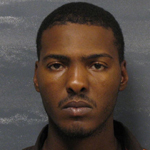 Banks, 27, turned himself in to the Demopolis Police Department on Thursday morning around 10:30 a.m. He was arrested without incident, according to DPD Chief Tommie Reese.

Banks has been wanted since Saturday, when he allegedly shot another man in the leg. The incident happened around 5:50 p.m. on Patterson Drive and was the first of two shootings Saturday evening.

Reese thanked members of the Demopolis Police Department for their hard work on the case.

Banks was processed at DPD and later transported to the Marengo County Detention Center to await a bond hearing, Reese said.