Murder suspect turns himself in

A Demopolis man wanted in connection with a Saturday murder has been arrested. 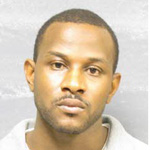 Travis Doniel Wesley, 29, turned himself in to Demopolis Police and U.S. Marshals early Thursday morning around 4:30. He was arrested without incident, according to DPD Chief Tommie Reese.

Reese thanked Wesley’s family for assisting the department in bringing him into custody as well as members of the Demopolis Police Department and U.S. Marshals Service Gulf Coast Regional Fugitive Task Force for their work.

Wesley had been on run since the shooting that killed Lequinton Montrell Lomax. The incident happened Saturday around 11:30 p.m. on Wolf Circle.

After turning himself in, Wesley was processed at the police department and transported to the Marengo County Detention Center to await a bond hearing, Reese said.

The shooting was the first homicide in Demopolis since 2008.