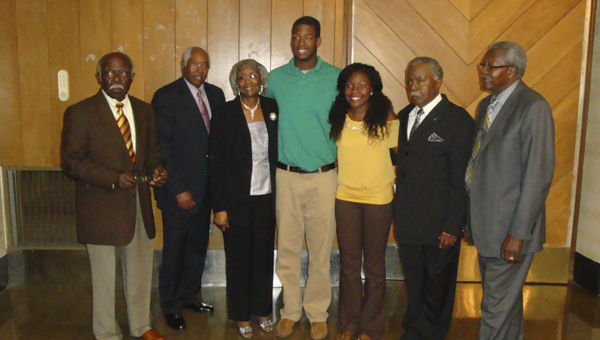 The U.S. Jones High School Class of 1959 has started a scholarship for students in the area to help them in their pursuit of higher education.

Tarlee Brown, who helped get the scholarship program going, said he hopes the idea will catch on with other U.S. Jones classes so more scholarships can be offered in the future.

“We did this once before, but we weren’t able to continue because we were still young and were focusing on getting our own children into college,” he said. “Now that our children and most of our grandchildren are grown, we are coming back to it.”

The Class of 1959 meets every two years for a reunion, so they are hoping some other classes will join in to help keep the scholarships going each year.

This year, three $250 scholarships were awarded to local students who graduated in May. Demarcus Sears and Brionna Merriweather from Demopolis High School and Arthur Allen from John Essex High School were the first students to receive the scholarships.

Sears is attending Shelton State Community College to begin his path to industrial engineering. Merriweather attends Troy University and is studying to become a nurse practitioner. Allen attends Alabama A&M, where he plans to major in computer science and engineering.

“We put a committee together and asked for help from the community and churches, and the support was overwhelming,” Brown said. “We had to get a short list and go forward with it. We had so many great candidates for this year.”

Brown added that he and many of his classmates were able to go to college because they received help along the way, and they want to do the same thing for students today.

“We want to build up the scholarship to at least $500, maybe even $1,000, and continue to give it to three students each year,” he said. “That can happen with other classes joining in and the community getting involved.”

Brown said his class is planning to do a series of fundraisers to continue raising money for the scholarships.

“We don’t want to do just a one-time thing,” he said. “We want this to stick on and keep going for years to come.”