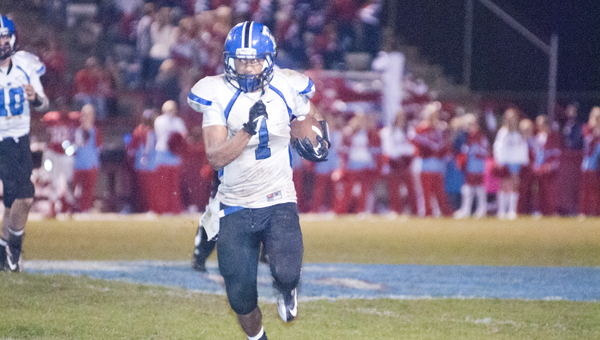 Demetrius Kemp caught the game winning 2-point conversion pass from Tyler Oates. Kemp also ran back a kickoff to the 24-yard line that set up a late Leif Midgordon kick that sent the game into overtime.

It was the day after Halloween, but the Demopolis-Hillcrest game had plenty of tricks and a nice treat for the Tiger faithful.

Demopolis won 60-59 in a double overtime thriller at Hillcrest-Tuscaloosa, in a game that lasted three and a half hours.

The game was in question right until the final play, when Tyler Oates found Demetrius Kemp on a 2-point conversion to give Demopolis the win.

The play capped a strong end-of-game performance from Kemp. 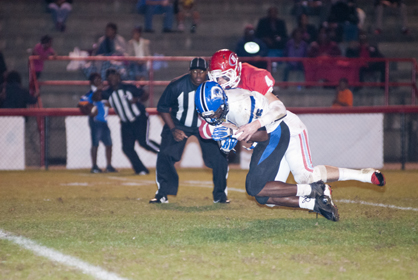 Senior runningback Roderick Davis at five touchdowns on the night, including two in overtime.

After taking a late lead, it looked liked Hillcrest would take the win in regulation until Kemp ran back the ensuing kickoff to the 24-yard-line. The Patriots had just scored to go up 45-42 with 1:30 left in the game.

The extra-point was blocked by Kemp, giving the home team just a 3-point advantage.

Kemp’s return ultimately set up a 27-yard field goal by Leif Midgorden to tie the game 45-45 with 22 ticks left.

“Hillcrest made some plays … You can’t take anything away from their kids,” said Demopolis head coach Tom Causey after the game.

For a while, the game didn’t look that close. 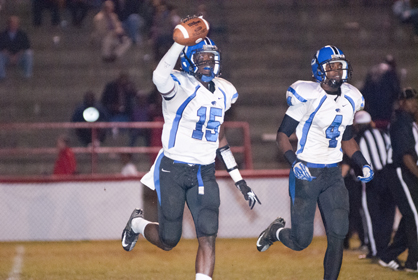 Cortez Lewis celebrates a fumble recover in the third quarter.

Demopolis came out of the locker room after half time with a 4-point lead but the score didn’t stay close for long.

The Tigers were able to take advantage of three Patriot fumbles by scoring three touchdowns to go up 42-17.

Demopolis capitalizing on Hillcrest turnovers was a theme throughout the night.

Rahmeel Cook recovered a fumble on the Patriots first possession, which would set up a long 76-yard rushing score by Roderick Davis.

Hillcrest would add a field goal before Davis would score again, this one from 5 yards out.

The Patriots were still prepared to defend their home turf and drove down the field and scored via a 3-yard run by Cahlil Ellis to tighten the score to 14-10.

They would score again off a 37-yard pass from Riley Nix to Darnell Webb. The 17-14 advantage would be the team’s last lead until late in the fourth quarter. 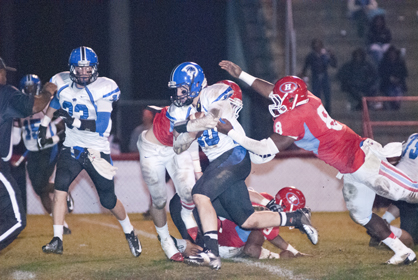 Demopolis answered with a touchdown drive of its own in the last 1:07 of the second quarter, which was capped by a 5-yard pass from Oates to Cortez Lewis that left just 3.5 seconds on the clock.

Lewis forced a fumble on their first snap of the third quarter. The play led to a Kemp 1-yard score.

Fumble recoveries by Charlie Parten and Tyler Perkins would result in two more Demopolis scores off a 13-yard keeper by Oates and a 3-yard run by Davis.

The touchdowns put the Tigers up 42-17 but Hillcrest mounted their comeback, scoring four unanswered TDs until Midgorden’s kick evened things.

Roderick Davis scored his fourth touchdown in the first overtime, which Hillcrest answered.

The teams traded touchdowns again in the second overtime, with the Tigers score coming off Davis’ fifth and final rushing score.

The drama was enough for Demopolis, who chose to go for two and found pay dirt with the pass from Oates to Kemp.

Demopolis ended up with 465 yards on the night, including 360 on the ground.

Hillcrest lit up the night sky with 659 total yards, 457 of those being passing ones.

Logan McVay had five solo tackles and four assists, while Kemp had six solos, one assist and two fumble recoveries.