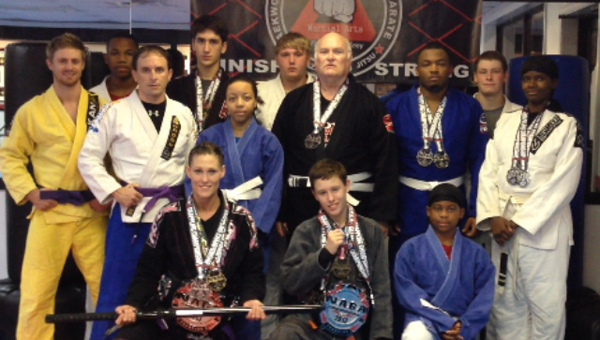 The 2013 North American Grappling Association’s Southeast Regional Championships were held in Riverdale, Ga., and features gi and no gi grappling competition in four different levels of experience: novice, beginner, intermediate, and expert. This particular tournament had more than 600 competitors.

“This tournament presented some of the biggest challenges our team has ever faced at a NAGA event,” said Jay Russell, co-owner and BJJ instructor at Ross. “We had two more fighters grappling at the highest level of competition – the expert division; we had two moving up to intermediate, Brett [Schroeder] moved up a weight class and opted to fight older kids, and Mr. Ross, who is 66, was competing against guys in their 40s.”

Collin Morgan poses with the championship sword he won in the 8-9 year-old intermediate boys middleweight division at the NAGA Southeast Regional Championships in Riverdale, Ga.

Jay Russell said Morgan won his second-place medal by submitting his opponent with an inverted triangle choke, which is an advanced technique for a 9-year-old to pull off.

Other Ross fighters placed well in the competition, and their medals are as follows:

•Ron Ross – Second in super heavyweight beginner director’s no gi division. This division is for 40-49 year olds, and Ross is 66.

“From the results, I’d say our team faced these challenges head-on and did a fantastic job,” Jay Russell said. “In addition, Ronda and Brett’s wins in the expert divisions added two more championship NAGA belts to our awards. I am extremely pleased with our performance at this event, and I’m proud to coach such dedicated and loyal martial artists.”