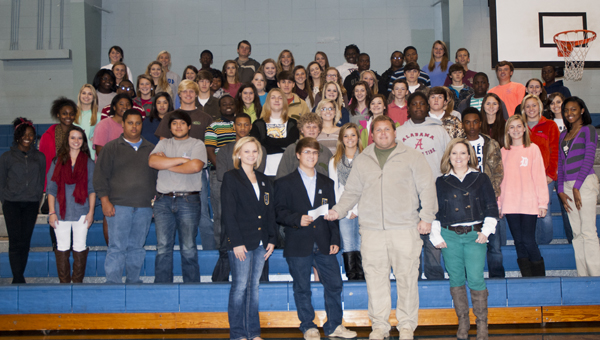 The Demopolis High School DECA Club presents 17th Judicial Drug Task Force Commander Clint Sumlin with a $1,200 check. The money was raised by the club during their “Drugs are Scary” haunted house on Oct. 25.

The Demopolis High School DECA Club will be holding two fundraisers in the next few weeks, and on Tuesday, they awarded the 17th Judicial Drug Task Force with a check from the club’s most recent fundraiser.

The club presented a check worth $1,200 to Task Force Commander Clint Sumlin, which was raised during DECA’s haunted house on Oct. 25.

“We will be able to use this to continue our undercover operations, which help us keep our jurisdiction safe,” Sumlin said.

Beginning Wednesday, Nov. 20, there will be bins placed at certain businesses around town to collect stuffed animals. The Teddy Bear Drive is part of the club’s “Drugs are Scary” campaign.

“We want to take the fright away from children,” DECA sponsor Connie Davis said. “The bears will go to children whose parents have been picked up.”

DECA will give the bears to the Demopolis Police Department for them to hand out to children in troubled situations.

Some of the box locations will be Walmart, Dollar General, and each of the four schools in Demopolis. The boxes will be out for two weeks.

On Saturday, Nov. 23, the club will hold a tree decorating contest for downtown businesses from 12-6 p.m. There will also be games in the public square from 12-4 p.m. Tickets are $3, and can be purchased by calling Demopolis High School at (334) 289-0294 and asking for Connie Davis.