Wright selected as Cadet of Month

Demopolis native Alex Wright, a member of Auburn University’s Air Force ROTC, has been selected as Cadet of the Month. 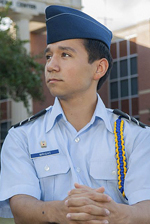 The honor is given by the John “Boots” Stratford Squadron of the Arnold Air Society, which is hosted by Auburn’s Air Force ROTC Detachment 005.

Wright is a member of the Arnold Air Society, a community service honor society, and recently attended the Air Force ROTC national conference.

He was selected for the award “for displaying remarkable enthusiasm in performing his duties,” according to Auburn ROTC’s website.

The announcement continues, “Cadet Wright is the director of operations for John “Boots” Stratford Squadron, and in every way has gone above and beyond expectations for his role. He worked diligently on many projects over the summer and has grown the squadron’s networks and service opportunities. He has also proved very eager to assist other staff members in their responsibilities. We are confident that the squadron is moving forward under the influence of Cadet Wright.”

Wright is studying computer engineering at Auburn. He is also active in the Auburn Christian Fellowship.

He is a 2012 graduate of Demopolis High School and a member of Trinity Episcopal Church and attended the University of West Alabama as a dual enrollment student.

He is the son of Angelia Mance of Demopolis and Jay Wright of Pensacola, Fla.