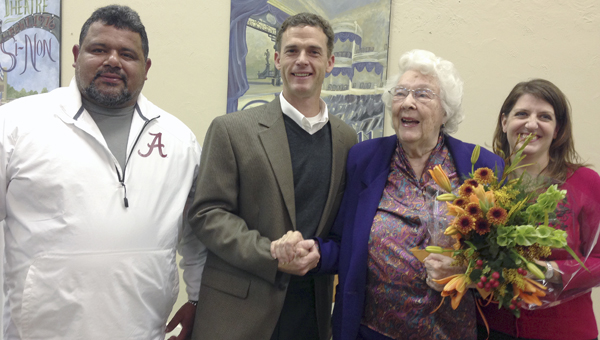 Supporters of the Demopolis City Schools Foundation hope 2014 is a “million-dollar” year.

If all goes according to plan, 2014 will be the year that the nonprofit’s endowment passes $1 million, and, by next fall, the Foundation will have likely given out more than $1 million in classroom grants.

The endowment campaign was formally kicked off Thursday at a “Chamber After Hours” at the Coplin building in downtown Demopolis.

Once the goal is met, earnings from the endowment will be put back into the classroom grants program, potentially increasing the amount awarded each year by tens of thousands of dollars.

Over the past 20 years, all endowment earnings were saved as that fund continued to grow.

“Twenty years ago, the Demopolis City Schools Foundation began with the ideas of several people and the support of many of our local families and businesses,” said executive director Amanda Barnes. “We have accomplished a lot in those 20 years and more than two complete school generations have benefited from the private support of the Foundation.”

The Foundation has put more than $950,000 into the classroom over the last 20 years. The last few years, classroom grants have averaged about $50,000. Being able to award that same amount in 2014, will push the grants over $1 million.

“That is an amazing accomplishment for any community, but particularly for a community of 8,000 people,” Barnes said.