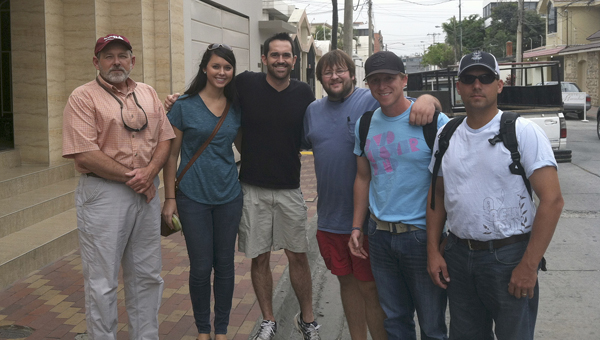 Shown are the members of Gallion Baptist Church who traveled to Ecuador on a missions trip on Oct. 11-18. From left are Jeff Couch, Kendra Elmore, Casey Elmore, Byron Randall, Hank Atchison and Wray Anderson.

Members of Gallion Baptist Church and Greensboro Baptist Church have been working for several years to bring the Gospel to Ecuador, and in October, they made their third trip to the country to minister.

Hank Atchison, pastor of Gallion Baptist, went to Pindal, Ecuador, in the Loja Province for the second time on Oct. 11-18. The first time he went was in October 2012, and it was more of a medical mission. Pindal is a 10-hour bus ride from the nearest airport, and Atchison said you don’t just get there by accident.

“We took an American doctor and helped those that needed care,” he said. “We also ministered while we were there and started to lay a foundation.”

The second trip the churches took was in June, and it was geared more towards children with a Vacation Bible School feel to it.

The most recent trip, Atchison said, was planned to be different.

“We planned to go and disciple to those who already made a decision and to share the Gospel with people that wanted to know more and had questions about the teachings,” he said. “We were going with nothing to hide behind, like a doctor, food or clothing. We were going just to minister. We saw quickly, though, that our plans just weren’t going to work.”

Atchison said the street corner preaching approach was not an effective tool in that area, so the group of eight – six from Gallion Baptist and two from Greensboro Baptist – had to take a more Biblical approach to their ministry. 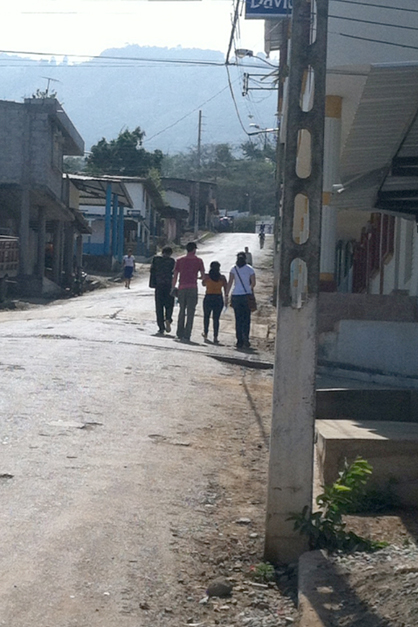 A group of missionaries walk down a Pindal, Ecuador, street during their mission trip in October.

“We had to go into people’s homes and get to know them and what they do,” he said. “Eventually they would want to know why we were there, and that’s when we were able to spread the word of God.”

The group from Alabama partnered with eight to ten Ecuadorian pastors to help spread the word, and two of the Ecuadorians, David and Manuel, are still holding meetings every Thursday and Friday with people who want to hear the Gospel.

Atchison said Manuel, who doesn’t own a vehicle, travels by bus on a six-hour trip every week to different parts of the country to minister to people. He walks by foot through the mountainous terrain to get to the different villages after he gets off the bus, according to Atchison.

“He puts fifty percent of his income to missions,” Atchison said. “He’s given everything to be able to preach the Gospel.”

Casey Elmore from Gallion Baptist was also on the trip, and he said there were five public baptisms in the creek during their trip, which is a big deal for the people there.

“Many of the people don’t believe in being born again, and it’s easier for them not to be publicly baptized because they run the risk of being shunned by their families,” Elmore said. “This was foundation work, and the power of the Gospel is not in us, it’s in the word of God.”

He added that they established 12 groups of three people to read the Bible for themselves, which is something that isn’t commonly done, even though most of the people do own their own Bibles.

On the weekends, a coffee club is open in the town, and it’s a place for people to meet and minister.

“The coffee club is open on weekends, and they can minister and outreach to people there,” Atchison said. “There is even WiFi, so they’re on Facebook and Twitter just like we are.”

Atchison said the trips cost around $1,200 per person, and that the groups are planning to go back in June and October of 2014.

Anyone who would like to support or be a part of these missions can contact Gallion Baptist Church by phone at (334) 289-3483 or by email at gallionbaptist@bellsouth.net.