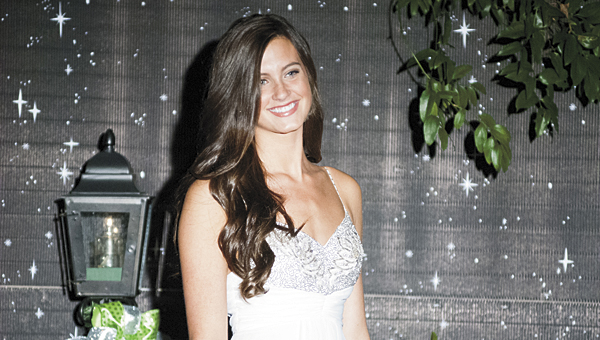 If there is one thing Mary Frances Webb has learned as the reigning Miss Christmas on the River 2013, it is that she will not pursue an acting career.

She laughed at herself as she recalled the number of retakes during a taped interview for a Meridian television station after she was crowned.

She kept flubbing her lines.

But Mary Frances is very excited about her year as Miss COTR, especially since she never thought there was a chance she would win the title.

The Miss COTR pageant was the first Mary Frances had ever entered. She did so only at the urging of her friends, especially Mary Howerton and Caroline Overmyer.

They cheer together for Demopolis High School football games, and her two friends already had entered the pageant.

She urged other young women to overcome their reluctance to enter.

“Anybody can be in a pageant. You never know what the outcome will be,” said Mary Frances, the daughter of Greg and Frances Webb.

“I had fun. I wasn’t really worried about the outcome,” she said, because she never expected to wear the crown.

Borrowing a 35-year-old vintage Mike Benet dress from Regina Hill, Mary Frances said the best part of the event was getting ready and getting all dressed up.

The biggest challenge was overcoming her nervousness.

Now that the pageant is behind her, Mary Frances is preparing for the hectic four days of Christmas on the River that starts Dec. 4. As Miss COTR, she will attend every event, beginning with the lighting of the Love Lights Tree at Bryan W. Whitfield Memorial Hospital on December 4 and ending with the gala on Dec. 7.

Between those dates she will reign over the naming St. Nicholas, visit the home museums during Christmas in the Canebrake and ride the queen’s float for the Saturday day parade.

Although she has been in the parade as a cheerleader before, this time she gets to ride instead of walk, she joked.

As a member of YouthLEAD, Mary Frances helped paint the flowers that will decorate one of the new floats this year.

She is enjoying COTR 2013, too, because she is able to support her hometown, meet people and have a lot of fun doing it.

Once COTR is over, the queen will return to her life as a DHS senior, preparing to enter the University of Alabama in the fall of 2014 to study nursing.