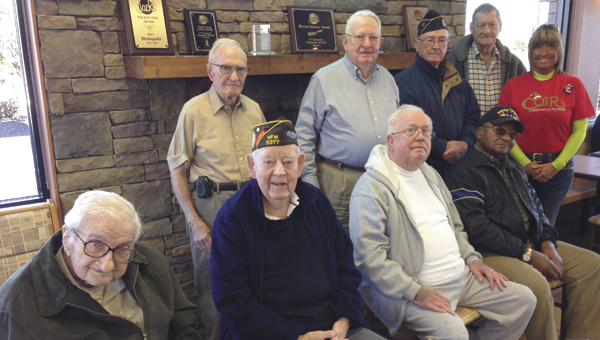 Eight of the nine veterans that will serve as grand marshals of the COTR day parade are shown. Not pictured is Arthur Lee Hitt.

Nine local veterans will serve as grand marshals for the 2013 Christmas on the River day parade.

Each of the men served in the 1940s or 1950s, with some seeing combat in World War II and some in the Korean War.

The grand marshals will ride the lead float in the parade on Saturday, Dec. 7 at 11 a.m.

They will also attend the Christmas on the River Gala at the Demopolis Civic Center at 6 p.m. They will have a table reserved for them at the Gala.

The grand marshals and the time they served are as follows:

•Henry Harrison, 94, was in Army Artillery during WWII. He was a Battery Commander and Foreign Observer in the 81st Division; he was at the Battle of Angaur in the Pacific campaign and fought of the island of Angaur in the Palau Islands from Sept. 17-Oct. 22, 1944. This battle was part of a larger offensive campaign known as Operation Forager, which ran from June 1944 to Nov. 1944. He was also at the Philippine Invasion at Leyte Island.

•Howard Jones, 83, enlisted in 1946 in the United State Marine Corp, and was stationed in Utah until he left the Marines in 1949.

•Dick Kirkpatrick, 90, was in the 42nd Infantry in France and was wounded at the Battle of the Bulge.

•Freddie Gracie, 86, entered the Army in 1950, and is a veteran of the Korean War. He was an assistant squad leader and carried a BAR in the 8th Regiment, 1st Calvary Division. He won the Silver Star for being on the front line and being hurt by a mortar round in Korea. He served 17 months of combat in Korea.

•Bill Harris, 90, was a crew chief in the United States Air Force for the A-20 bombers in New Guinea.

•George Franks, 85, entered the United States Navy in 1946. He attended boot camp in Norfolk, Va., and shipped out to a submarine base at New London, Conn. He was honorably discharged from the Navy.

•Hugh P. Edwards, 89, was drafted and entered the Air Force on April 1, 1943. He participated in air offensives in Japan and the Eastern Mandates in the Western Pacific. He was stationed in Saipan and received three Bronze Stars. He received an honorable discharge on Oct. 25, 1945.