Christmas Cards for Troops has best year yet 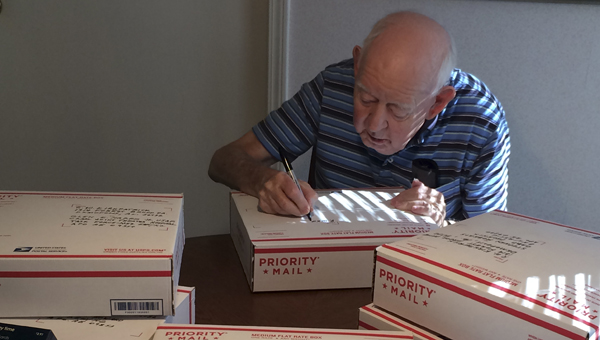 Dick Kirkpatrick personally signs and addresses each letter sent to the troops in the First Presbyterian Church’s Christmas Cards for Troops annual campaign.

Dick Kirkpatrick is a man whose 90 years of life have been spent faithfully serving others.

Through all these years of service one cause has always been closest to his heart – those who have served and are serving in the armed forces of the United States.

He is very active in the local VFW post, and a few years ago, he felt the need to reach out in a special way to those on active duty, especially in places like Iraq and Afghanistan.

He asked the members of his church, First Presbyterian in Demopolis, to provide Christmas cards with a personal message of gratitude to the troops. The first year, around 200 cards were collected and mailed to military chaplains for distribution to the soldiers.

This year, thanks to his perseverance and a very effective e-mail and internet campaign directed by Elaine Carr, more than 1,600 cards have been collected from schools, churches and individuals in hopes that the Christmas season will be a little brighter for our troops serving so far from home. And every envelope will be personally addressed, “To a Brave Soldier,” by Dick and Doris.

“I didn’t expect it to grow like it has, but I know the troops really look forward to receiving letters from home.”

Kirkpatrick said when he was serving in France in World War II, he always enjoyed receiving letters from home.

“They really get a kick out of the ones made by the school children,” he said.

“Mrs. Carr, who is a teacher, has done a lot to help get the schools involved.”