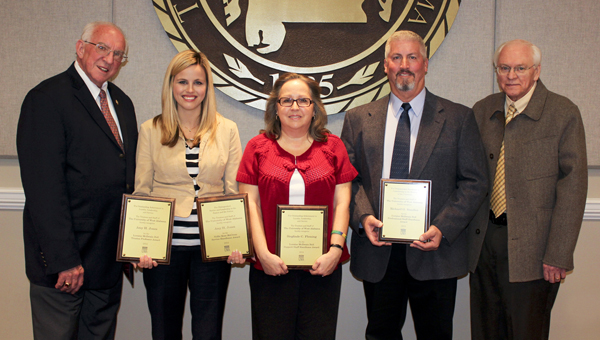 The University of West Alabama presented four prestigious awards to members of its faculty and staff during Monday’s UWA Board of Trustees quarterly meeting at Bell Conference Center.

Candidates for the awards are nominated by the University community, and the winner in each category is selected by a committee of peers.

The McIlwain Bell Trustee Awards are presented annually in three categories: support staff, professional staff, and faculty. Each comes with a plaque and a check for $1,000.

Fleming began working at UWA in 1978, shortly after graduating with an associate degree in secretarial science. In 1980, she began working for McGregor Printing, where she stayed until her return to UWA in 1994, a move she said she’s happy to have made.

“I had been back at UWA for two days and felt like I never left,” Fleming told the UWA Board of Trustees and those gathered in the audience. “I love this place, and I love my job.”

UWA Provost David M. Taylor explained that Fleming’s letters of nomination tell of her always-positive attitude and commitment to assisting students with their needs. Also, he said, her colleagues who often refer to her for assistance admire her skill in the use of campus technology at UWA.

Gary Rundles received the 2014 McIlwain Bell Professional Staff Excellence Award. Rundles joined the UWA Athletics staff in 2000 as head baseball coach and has posted remarkable records since that year, including the 2009 season, during which he led UWA to a berth in the NCAA Division II South Regional. Under his leadership, UWA has seen five GSC series wins.

Taylor explained that every letter of nomination for Rundles pointed to his University spirit and support for all athletic teams.

“One of his colleagues said that Coach Rundles is a Tiger from top to bottom and wants nothing but the best for every member of the UWA family,” Taylor said.

“I’m so thankful for the opportunity I have to be here,” Rundles said. “I’ve always said that you’re only as good as the people you surround yourself with, and I’m lucky to be in good company.”

“It’s important to note that the selection committees for the McIlwain Bell Trustee Award and the McCrory Service Award are two completely separate groups that operate discreetly with different sets of criteria,” Taylor explained.

Jones joined the UWA faculty in 2006 as a lecturer. Her efforts led to the implementation of UWA’s Integrated Marketing Communications major, which grew from zero to 50 immediately after its launch in the fall of 2012. It is the only major of its type in Alabama.

The McIlWain Bell Trustee Professor Award recognizes distinguished scholarship and professorship, both of which Jones’s colleagues say she demonstrates. Taylor remarked that the professor’s dean and department chair describe her “as a truly exemplary teacher and advisor who receives excellent course evaluations [from students].”

The McCrory Service Award recognizes commitment to the University community through scholarship and service. This, too, is an area where Jones excels, Taylor told the board.

“Dr. Jones excels in the area of professorial life,” Taylor said. “She was a major player in iCommunicate, the Quality Enhancement Plan that was a critical part of UWA’s excellent reaffirmation visit from SACS.”

Jones is a member of several other University committees and is the current president of the Faculty Senate.

In addition to her professorial duties, she has coordinated UWA’s United Way campaign for several years and is a founding member of the Susan G. Komen for the Cure Black Belt Community Breast Cancer Coalition. Her service efforts include production of television commercials for the local chapter of the American Cancer Society and service learning projects for local businesses and for Turning Point Domestic Violence and Sexual Assault Center.

The Loraine McIlwain Bell Trustee Awards were established in 1996 through an endowment by the late Mrs. Bell’s daughter and son-in-law, Mr. and Mrs. L.G. Cunningham. UWA’s Bell Conference Center is also named in honor of Mrs. Bell and her husband.

The McCrory service award, presented this year for the second time, is made possible by an endowment by the late Miss McCrory, who earned the B.S. in English and M.Ed. in Secondary Education from UWA and the doctorate from the University of Alabama.