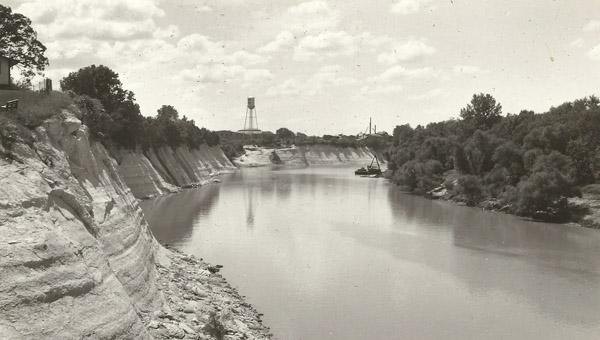 “Robert Hudson’s Demopolis” will feature photos of different events in Demopolis during his lifetime, as well as photos of normal, every day life. Shown are the white bluffs.

Anyone struggling to find a good stocking stuffer this Christmas season, the Marengo County Historical Society has something any local resident or history buff would be sure to enjoy.

“Robert Hudson’s Demopolis” will be released in time for Christmas, and the 5.5-by-8.5-inch flip book offers more than 250 photos taken by late Demopolis resident Robert Hudson during his lifetime.

The photos in the book will range from different historical events in Demopolis from the early to mid-20th Century to more artistic photos. 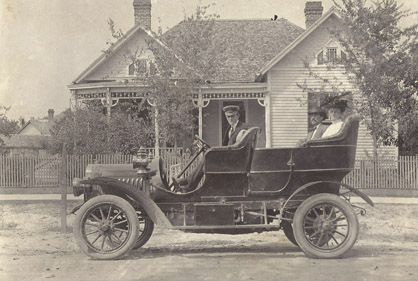 Shown is Robert Hudson in the first car in Demopolis, a 1907 Rambler.

He graduated from Alabama Polytechnic Institute, now Auburn University, as an electrical engineer, and he worked for the Demopolis Electric Company. According to research done by Kirk Brooker and the Historical Society, Hudson was the first person to wire Bluff Hall with electricity. He married Alice Spurlin, who was a member of the Glover family.

Hudson’s father owned Hudson Racket Store on Washington Street in downtown Demopolis, and when his father passed away, he took over the store.

Brooker said he spoke with Buddy and Martha Griffith, who knew Hudson when he owned the store.

“Mr. Buddy worked with Robert at his store for two years,” Brooker said. “He and his wife, Martha, described him as a quiet, reserved man who was very intelligent and interesting. They said he was always animated when speaking of photography and travel, which were his true passions.”

The store Hudson owned sold anything and everything, especially things that were necessary for living in the country, Brooker said.

Hudson retired when he built a home in Scratch Ankle, now known as Lake Lane. 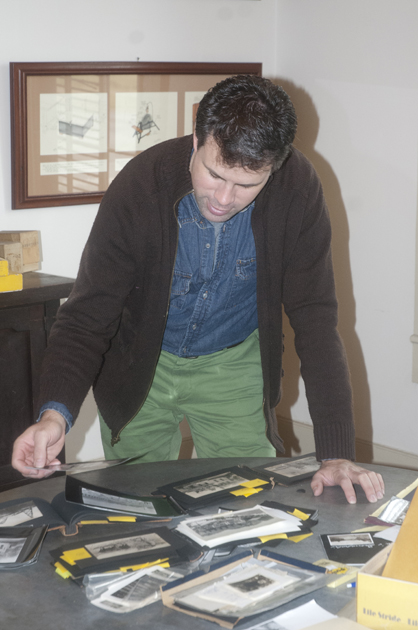 Kirk Brooker with the Marengo County Historical Society goes through some of Robert Hudson’s photos.

The home located at 404 South Walnut Ave. also belonged to Hudson and his family.

In his home in Scratch Ankle, Hudson had a dark room where he could develop his photos. He had some photos of the flu epidemic in the early 1900s that was devastating to the area as well as some rare photos of the Rooster Auction.

“He started taking photos, we think, around 1907,” Brooker said. “He kept a catalogue of nearly every photo he took, which helped when we started creating this book. We have photos from the first vehicle in Demopolis, a 1907 Rambler, to the dedication of the Demopolis Lock and Dam.”

When Hudson died, he left his photos to Elizabeth George, Martha Griffith’s mother, according to Brooker. George gave the photos and the negatives to Joe Turner who gave them to the Historical Society.

Brooker said Winston Smith went through the photos and the catalogue before they were given to Turner.

“We couldn’t have done this book without Winston’s research,” Brooker said.

He added that Hudson took photos of every day things that many people wouldn’t have thought to take a photo of.

“There are some photos of some mundane things like the town blacksmith, which was just every day life in that time,” he said. “He preserved that time with his photography, but that wasn’t his purpose for taking them. He was just passionate about photography.” 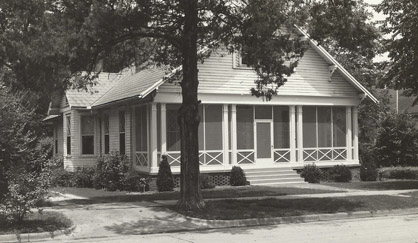 The home at 404 South Walnut Ave. belonged to Hudson and his family.

The book, which will be available at the Craft Corner next to Bluff Hall before Christmas, mimics the original photo albums with its size.

“Some pages have a large picture with a description, and some have several smaller pictures,” Brooker said. “We used about 250 of the 700 or more photos of his we have.”

Brooker said he wanted to thank several people for their help with the book.

“Martha Turner and Kate Melton were a huge help in selecting photos, compiling information and editing,” he said. “Dr. Stanhope Brasfield was also vital with his abundant knowledge of Demopolis”

Brooker also thanked Ed Newell, who scanned all of the photos into a computer.

A reserve list for “Robert Hudson’s Demopolis” is being kept at the Craft Corner, and people can either call (334) 289-9644 or email marengohistory@bellsouth.net to get on the list.