Demopolis was Al Burkett’s old stomping ground back in the 1950s.

That’s how he met his son’s mother, Jackie, and ultimately got introduced to Christmas on the River.

The songwriter now lives in Texas but has recently gotten reintroduced to COTR by penning a song about the festival.

“It never donned on me to write a song about it, but then I thought, ‘Why not?’” Burkett said. “I contacted the Chamber of Commerce and asked if anyone had ever written a song.”

The answer was not one that anyone could remember. That would lead to hours and hours of research as Burkett learned the ins and outs of Christmas on the River.

“I wanted the song to have a meaning to it and tell the story of how it [COTR] got started,” he said. 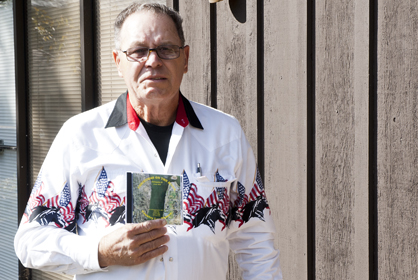 Texan Al Burkett has written a song about Christmas on the River.

The lyrics talk about Mem Webb and Barry Collins creating the event 42 years ago as well as events like the parades, the Jingle Bell Run, the barbecue cookoff and the lighting of the Public Square and Love Light Tree.

While Burkett wrote the song, it’s actually sung by Country Lou Watson. Copies will be for sale at this year’s Fair in the Square.

Earlier this fall, Burkett visited Demopolis and played the song for Webb and the Chamber of Commerce as well as other places around the city.