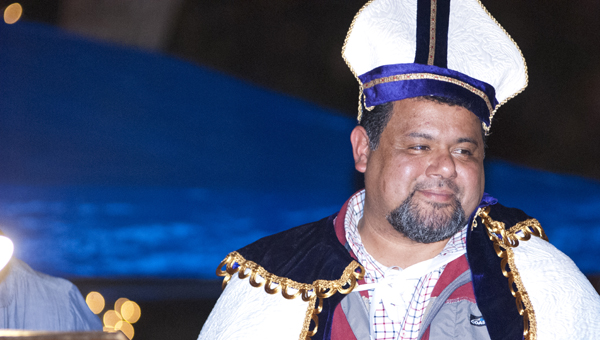 J.R. Rivas was crowned the 2013 St. Nicholas on Thursday during the lighting of the Public Square.

J.R. Rivas had few words to say after being crowned the 2013 St. Nicholas.

After thanking Katie Windham for her kind words in introducing him as St. Nicholas and the Chamber for sponsoring Christmas on the River, Rivas just had a couple of words to add.

“I really don’t have much to say other than, ‘Roll Tide!'” said the big Alabama fan and owner of Personal Touch Inc.

Windham, who helped organized Thursday’s Public Square lighting, had a little more to say about Rivas and why he was chosen for the honor. 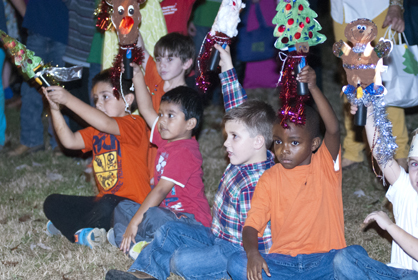 Children from Westside’s after-school program hold up lanterns they made for the lighting.

“For 24 years, we have had St. Nicholas as part of Christmas on the River, and we are excited to add a 25th name,” said Windham. “[Rivas] Gives selflessly all year long to numerous groups, organizations and citizens of this community. He gives and most of the time people don’t even realize that it is him that has done it. He never asks for recognition or even speaks of what he does after the fact.”

Windham touched about Rivas’ work with youth soccer, underprivileged children and in the schools. He recently made a $50,000 pledge to the Demopolis City Schools Foundation.

“Every time you see him he has a smile and a kind word for every person he meets,” Windham said. “He portrays the Christmas spirit all year long and quietly brings opportunities to the children of Demopolis.”

The Demopolis Area Chamber of Commerce defines St. Nicholas as a Demopolis resident who best portrays the spirit of Christmas all year long. He or she is someone who brightens your day when you see them or goes the extra mile when you need a little boost. This person is someone who has made a positive impact on your life or the lives of your children. 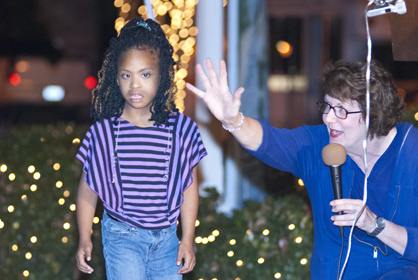 In addition to the St. Nicholas crowning, Christmas on the River queens were recognized as well as 2013 Special Child Generria Brown. 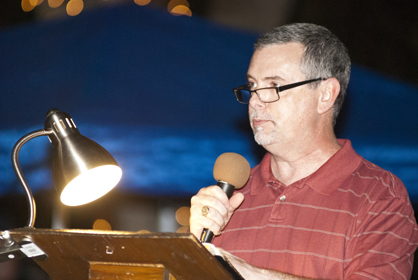 David Willis, pastor at Demopolis First Methodist Church, read the Nativity from the Gospel of Matthew, and kids in the after-school program at Westside showed off lanterns they had made in their annual parade.

Santa also made a visit with some help from Demopolis Fire and Rescue and one of  their trucks. The jolly old elf stayed around for a while and had photos taken with children by Fleming Photography.