Kemp named Player of the Year for second straight year

For the second year in a row, Demopolis High School’s Demetrius Kemp has been named The Demopolis Times Player of the Year. 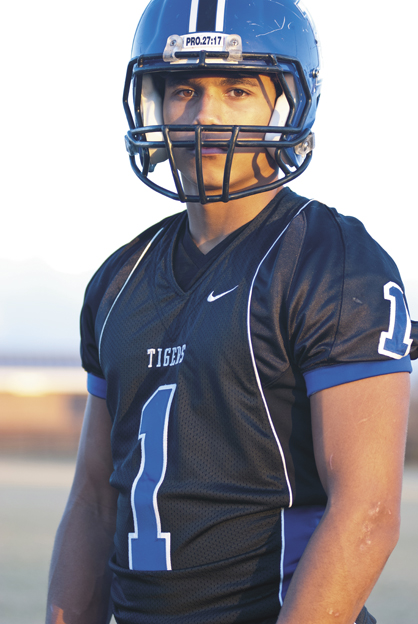 Demopolis athlete Demetrius Kemp is the 2013 Demopolis Times Player of the Year.

Kemp, who is verbally committed to Wake Forest, led the Tigers in all-purpose yards in 2013. He played safety, wide receiver and returned kicks for the Tigers this season, making an impact in every phase of the game. He racked up 1,564 yards on just 89 touches to lead the team. The next player in yardage, Roderick Davis, had 10 fewer yards than Kemp on 200 total touches. Kemp also had 11 touchdowns this season.

Kemp said he felt like he had a good season and that he helped his team with his play on the field.

“I think I had a good year,” he said. “I played well, and I feel like I helped improve the team.”

He added that he felt like his biggest moment came during the Hillcrest-Tuscaloosa game in week 10.

“I feel like the Hillcrest game was my best, especially towards the end,” he said. “The blocked field goal, the kick return and the two-point conversion for the win; we really played the whole 48 minutes and then some, and we really played together as a team that night.”

“We had big play potential every time he was on the field for us this season,” Causey said. “He made explosive plays in every phase of the game.”

Causey said on the field, Kemp’s quickness and intelligence made the difference.

“He was able to read what the other team was doing at all times, and he knew what was coming,” he said.

“His work habits off the field, whether it’s in the weight room or the classroom, really make a difference,” Causey said. “He’s a great student, and he does the right things. He goes to church regularly, and he values his family.”

Kemp was selected to represent Alabama in the Alabama-Mississippi All-Star Football Game to be played Saturday, Dec. 14 at Cramton Bowl in Montgomery.

“That’s a huge honor for me,” he said. “It’s a great opportunity and a privilege that not many players get. I’m excited to be able to play in the game.”

He was selected to the game as a wide receiver, but Kemp said he felt he played his best football on the defensive side of the ball this season.

“I did a much better job this year of making tackles and making plays in the secondary,” he said. “I felt like that’s what I had to improve on the most coming into the season. I knew I had to improve my tackling, and I made sure I got better in the off-season.”

He added that he also became a better player because he knew the schemes better.

“I didn’t have to think as much,” he said. “It was more like instinct so I was able to react quicker.”

In the preseason, Kemp injured his left hand, and his playing status was uncertain up until the day of the first game of the season against ACA.

“I was concerned because I really wanted to play,” Kemp said. “I didn’t want to miss any games, not for me, but for the team. I knew I would be able to help the team if I was on the field. I just had to be out there.”

As for his future, Kemp said he is looking forward to playing college ball and helping another program.