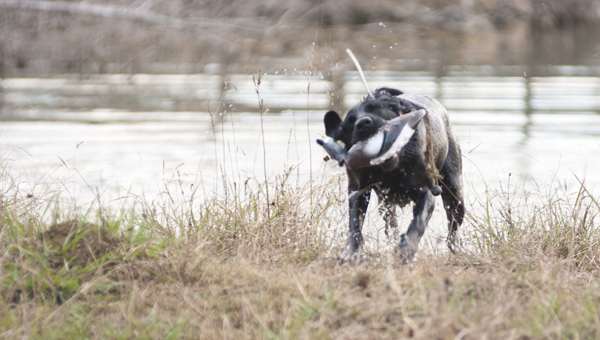 “Rooster” retrieves a decoy from a pond on Blackbelt Retrievers property.

Outside of Demopolis on more than 100 acres of rolling pasture land, Mark Bedsole and Brandon Smith operate one of the county’s more interesting businesses.

Training retrievers is something both have done for more than 15 years. 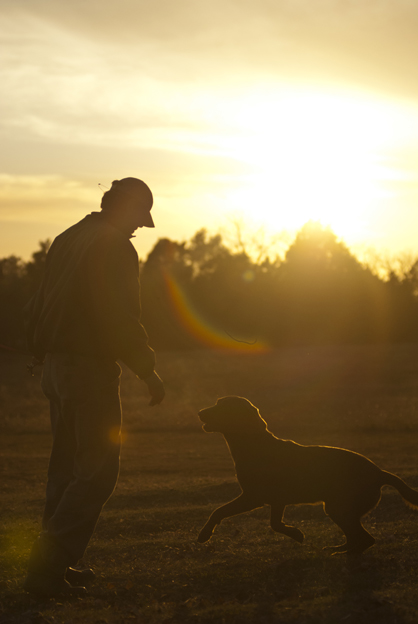 Brandon Smith is shown late one afternoon working with a dog just before sunset.

“We kind of did it separate for a while and then began working together,” said Bedsole. “If one was full, we’d see if the other one could take a dog. We decided to really starting working together in 2009, and three months later we decided to build this out here.”

The two take pride in taking puppies and transforming them into lifelong hunting companions.

Dogs can be trained at any age, but it’s best to begin at about five months, Bedsole said.

“At five months, you get a month’s worth of obedience training and then move on to fetch training until the adult dog teeth come in,” Bedsole said. “Once they come in, you can really start working on the beginnings of retrieving.”

Formal training can last for as little as three to four months to much longer to fine-tune certain things like hand signals.

“It really depends on what your interpretation of a ‘trained’ dog is,” Bedsole said.

But most dogs can be taught the basics in about four months.

“All dogs are different and learn at a different pace, but for your basic retriever, you’d have a capable hunting partner in three to four months,” Smith said. 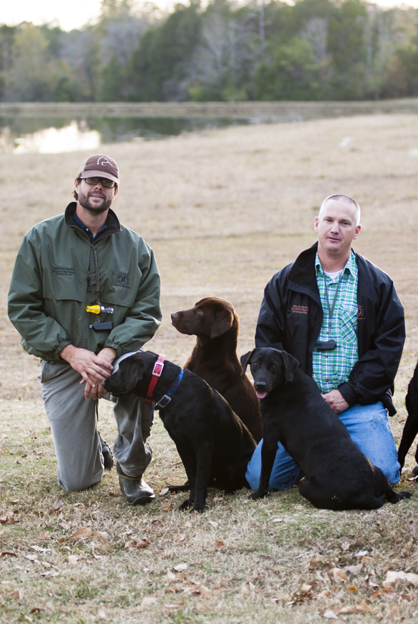 The Blackbelt Retriever kennel can hold 14 dogs. Shown are Brandon Smith and Mark Bedsole with several of their “tenants.”

Training can continue for the life of the dog.

To that end, they offer a one- to two-month pre-season “tune-up” to get retrievers back into shape prior to the start of hunting season.

With advanced training, dogs can be expected to be able to compete at the United Kennel Club’s “Finished Level” or the American Kennel Club’s “Master Hunter Level.”

“We also teach you how to handle the dog as well so you can get the most from your new hunting retriever,” Smith said.

“We will take all the time needed to make sure you are comfortable working with your dog before we send them home with you.”

Blackbelt Retrievers kennel contains 14 individual indoor and outdoor slips. The dogs are trained as soon as they arrive on how to use the door.

“They can decide whether they want to be inside or outside,” Bedsole said.

Dog owners are welcomed to visitor their dog while they are being trained, by calling ahead and scheduling a time.

The kennel is heated and cooled. Several people including Trace Dixon, Jason Cassidy and Smith’s grandfather, Joe Hill, help feed and exercise the dogs when they aren’t training.