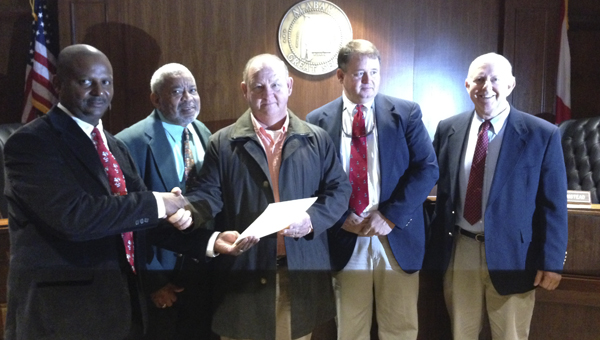 The Marengo County Commission approved a one-time $150 Christmas raise for full-time and part-time county employees during their Tuesday morning meeting.

Commissioner Freddie Armstead made the motion for the raise following an eight-minute executive session.

“We want to recognize them for representing Marengo County and bringing home a championship,” Commissioner Calvin Martin said.

Since Tuesday’s meeting was the final meeting of 2013 for the commission, they approved the 2014 holiday schedule for the county.

Since Christmas falls on Thursday in 2014, the commission decided to give employees Friday, Dec. 26 off for a long weekend. The holiday for Jefferson Davis’ birthday, which would have fallen on Monday, June 2 in 2014, was removed from the calendar because the primary election will be held Tuesday, June 3.

“We want to keep the courthouse open the day before the elections because people tend to have a lot of questions going into an election day,” said county administrator Meredith Hammond.

The extra holiday was moved to Christmas Eve, so county employees will have Dec. 24-26 as holidays in 2014. All other holidays remained the same from 2013.

The commission tabled one item on the agenda during the meeting. The auditors no longer compile financial reports, and the commission was looking into having Aldridge Borden and Company to prepare the 2012 and 2013 reports, but Armstead asked that Hammond look into local accounting firms before agreeing to use the company from Montgomery.

“If we can spend money in the county, it would be better for us to do that,” Armstead said.

Aldridge Borden and Company does the financial statements for the city of Linden.

In other business, the commission did the following:

•Agreed to participate in the 2014 Severe Weather Preparedness Tax Holiday, which is Feb. 21-23.

•Gave approval for Hammond to attend an administrator’s class on Jan. 8-9

•Agreed to surplus an old county truck and donate it to the city of Linden. The truck has not been running for several years.