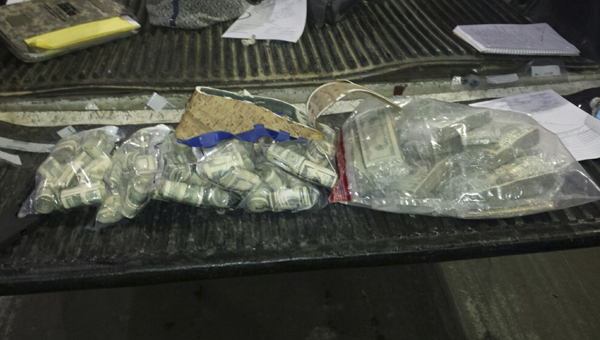 Task Force Commander Clint Sumlin said after speaking with the driver of the bus, Task Force agents brought a K-9 unit, and the dogs alerted the agents to check the luggage area of the bus.

“We found the money in suitcases belonging to three passengers,” Sumlin said. “The passengers denied knowing anything about the money when confronted about it.”

The passengers were Mexican nationals, so the task force called U.S. Immigration and Customs Enforcement, who is now overseeing the case.

“Seizing the ill-gotten proceeds of criminal organizations is a highly effective law-enforcement tool because it removes the profit incentive and hampers their ability to fund further illicit actions,” Parmer said. “This case is a prime example of local and federal authorities working together to identify, disrupt and dismantle criminal activities.”

HSI Birmingham investigators seized a total of $386,900 after determining the individuals in possession of the suitcases didn’t claim ownership of the currency and were bound for Mexico, which meant the money would have crossed an international border and was a potential violation of bulk cash smuggling laws.

The 17th Judicial Drug Task Force was started by District Attorney Greg Griggers in 2011. In addition to traffic enforcement, the Task Force also does undercover operations to stop drug trafficking and distribution in Marengo, Sumter and Greene counties.