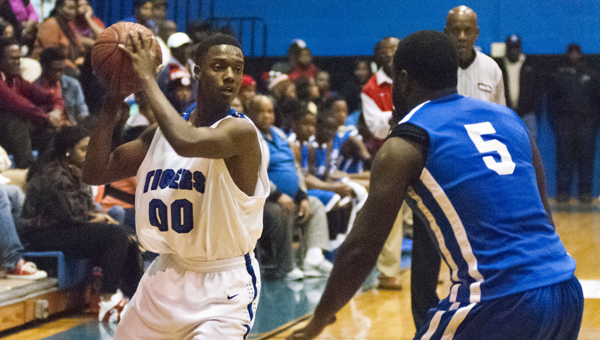 The Demopolis basketball program hosted Linden on Friday night, and two of the three Demopolis teams came away with wins.

The junior varsity boys defeated the Patriots 59-49 in double overtime, the Lady Tigers won 73-35 over the Lady Patriots, but the varsity boys fell 58-50.

In the girls game, Linden had no answer for six-foot-three inch Caleb Washington. She poured in 25 points for the Tigers and helped her team pull away in the second half.

Demopolis only led by nine at halftime, but came out strong in the third quarter, opening the second half on a 24-2 run. 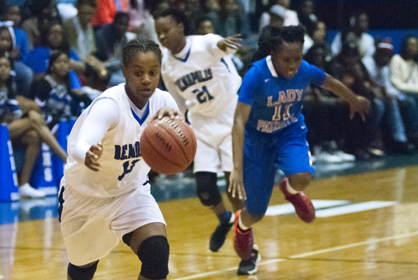 Sha’Deitra White drives the ball down the lane for Demopolis in their win over Linden.

“We came out with a lot of energy in the first five minutes of the third quarter,” head coach Tony Pittman said. “I believe those minutes play a big factor in who wins a game. I’m proud of my team tonight and the effort they showed.”

Sha’Deitra White added 14 for the Lady Tigers and Ivery Moore had 12. Also in double figures was Erica Bennett with 10. 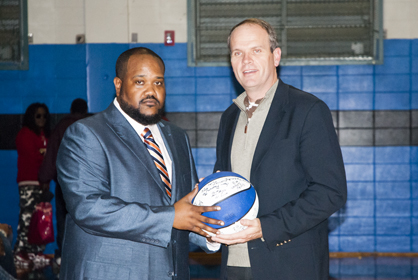 Demopolis boys head coach Rodney Jackson presents a signed basketball to Hunter Compton of Manley, Traeger, Perry and Stapp, thanking them for their support of the program.

The win moves the Lady Tigers to 3-3 on the season. For Linden, it was their first loss of the year.

The Lady Patriots were led offensively by Charquell Compton with 12 points and Imiya Agee with 10.

In the varsity boys game, Demopolis and Linden traded the lead through the first half, but Linden was able to get the Tigers out of rhythm and take control of the game late in the fourth quarter.

“They played man-to-man defense, and they were tough tonight,” Demopolis head coach Rodney Jackson said. “I think this one really came down to a lack of execution by our guys.”

Kiante Jefferies led Demopolis in scoring with 21 points. The only other Tiger in double figures was Tyler Perkins with 10 points.

For Linden, Imoras Agee led the way with 16 points. Kynard Craig had 15, and Chris Rogers had 8 for the Patriots.

Demopolis led after the first quarter, but a lack of strength down low hurt them as the game went on. Two of the Tigers big men, Demetrius Kemp and Cortez Lewis, were absent from the bench tonight because of football obligations.

The loss puts Demopolis at 3-5 overall, and Linden starts their season with an undefeated first week at 4-0.