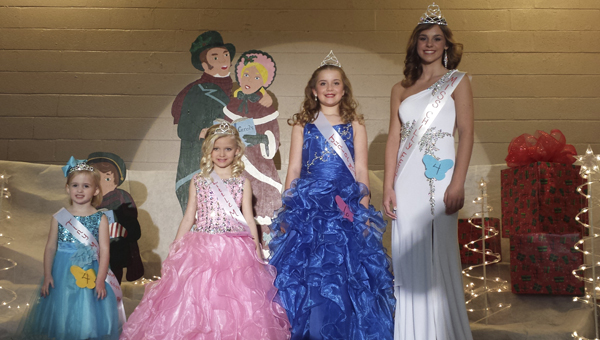 Linden’s ChiLLy Fest kicked off Thursday night with the ChiLLy Fest Pageant and concluded Saturday night with a fireworks show. In between the two events was a chili and cornbread cook-off, a carnival, a parade and various booths with arts, crafts and food.

“We had 13 chili teams this year,” said Linden city secretary Bruce Ward. “We had a lot of people eating chili Saturday.”

Macey Petrey was named Miss Chilly Fest, and Mary Howerton and Haley Mitchell were first and second runners up, respectively. Junior Miss was won by Alysse Dunklin, and Sidney Alyn Atkins was first runner up. Adalyn Broox Lindsay was named Little Miss ChiLLy Fest. Adesyn Faith Lynn and Madeline Dailey were first and second runners up, respectively. Tiny Miss was won by Ally Reid Cook, and Whitney Harrington was the first runner up.

The Linden Parade of Lights, Ward said, had floats from several local businesses and churches, and was one of the best parades Linden has had.

“Everyone loved it,” Ward said. “Even though it was wet and cold, we had a good turnout, and people really enjoyed it.”

First Bank of Linden won the Best Float Contest, which was a $100 prize.

Ward said the event has improved from year to year, and this year was no exception.

“There are always things to look at and improve on for next year, and that’s what we did for this year’s ChiLLy Fest,” he said. “We will start looking at things to improve for next year as well. Everyone enjoyed the concert by Chevy 6 on Friday, and we’ve heard nothing but good things about the weekend.”