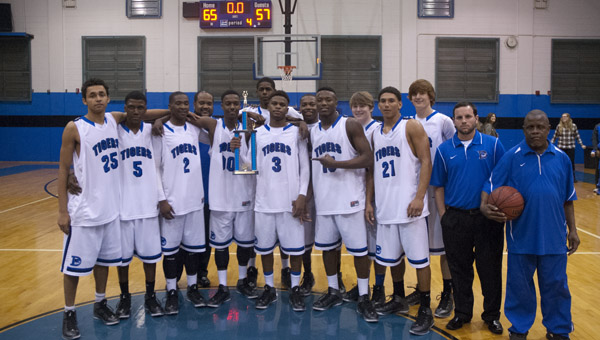 Kiante Jefferies had another outstanding game for the Tigers with 25 points to lead his team to the win.

“It feels good to win your own tournament,” DHS head coach Rodney Jackson said. “I’ve been telling Kiante to stay positive, and I’ve really seen that in him. He’s a natural, quiet leader, and everything just falls in line behind him. He had two outstanding nights for us.” 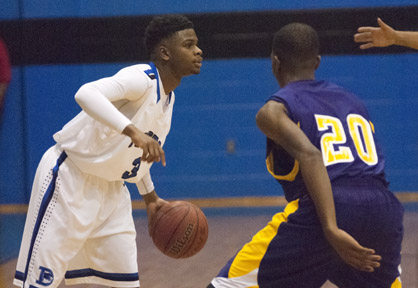 Kiante Jefferies directs teammates during their game against R.C. Hatch.

The Tigers started the game strong with a 19-point first quarter and led Hatch by two after one. Roderick Davis was the leading scorer in the first quarter for the Tigers with 6 points. Jesse Goldsby led the way for Hatch in the opening quarter with 10 points.

Hatch was able to take a one-point lead going into halftime at 37-36. Bakauri Jackson scored 8 in the quarter for Hatch to help them gain the lead.

The third quarter was back and forth, but Demopolis was able to grab a lead late in the quarter with strong defense and efficient offensive possessions. After three, the Tigers led the Bobcats 55-53.

The Tigers’ defense stifled Hatch in the fourth quarter, not allowing a point for the first six minutes and 26 seconds. With 1:34 remaining on the clock, Hatch hit their first of four free throws in the quarter, which were their only points. 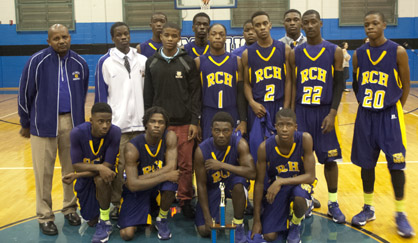 For Jefferies, this marks his fourth straight game with 20 or more points, and he is averaging 19.9 points per game this season.

The win puts Demopolis at 6-5 on the season.

In the first game of the night for third place in the tournament, Linden faced John Essex.

The Patriots controlled the tempo of the game and, while they never really pulled away from the Hornets, kept a lead throughout the game to win 68-60.

Imoras Agee led the way for the Patriots with 30 points. Michael Moore had 26 for John Essex and Joshua Moore had 19. 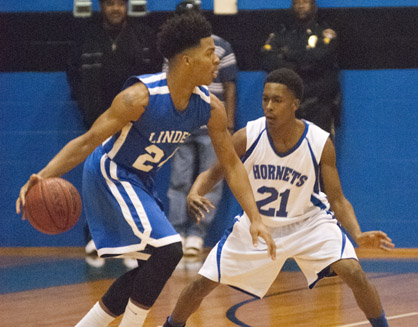 Linden’s Imoras Agee makes a move to get around Antwain Gracie of John Essex.

Linden led 16-12 after the first quarter and 29-21 at halftime. After the third quarter, it was only a six point game at 42-36, but the Hornets couldn’t slow down the Patriots offense.

The all-tournament team consisted of Michael Moore from John Essex, Agee from Linden, Bakauri Jackson from R.C. Hatch, Davis from Demopolis and Jefferies from Demopolis. Jefferies was also named the tournament MVP for his performance. 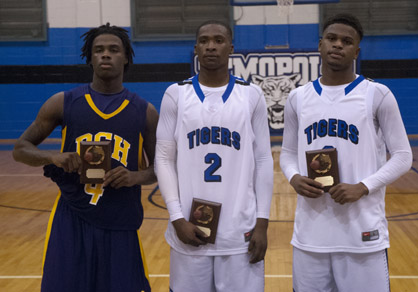