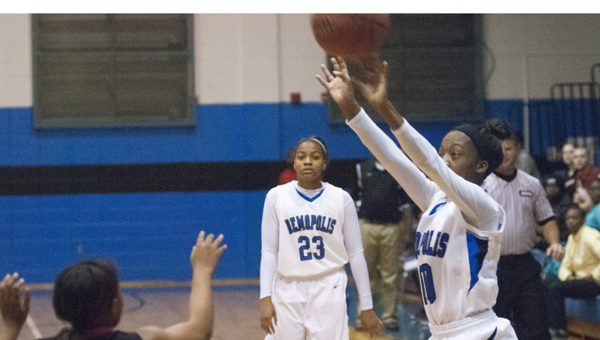 Erica Bennett takes a three-pointer for Demopolis. She finished the game with 16 points.

The Demopolis Lady Tigers opened area play Friday night with a win over Sumter Central, but the varsity boys weren’t able to match their success, falling to the Jaguars.

The Lady Tigers only trailed once in their game, and that was in the opening minutes down 3-2. Demopolis was able to pull away from the Lady Jaguars to secure a 65-45 win.

Only five players scored in the game for Demopolis, and four of those were in double figures. Ivery Moore led the way with 17 points, Erica Bennett had 16, Sha’Deitra White had 13, and Caleb Washington had 10. The other scorer for the Lady Tigers was Sylvia Clayton, who ended the game with 9 points.

“This was a big win for us,” head coach Tony Pittman said. “This was a confidence booster. You play the first 11 games to get ready for this.”

The Lady Tigers led by 17 at halftime, 35-18, and were able to stretch their lead to 25 by the end of the third quarter.

“We had a letdown in the third quarter where we let them get some scores, but we refocused on defense and got our intensity back,” Pittman said. “We’ve got to work on boxing out and rebounding, and we need our guards to step up and demand for the ball in late game situations.”

In the boys game, Sumter Central’s intensity early in the game forced Demopolis into uncomfortable situations causing turnovers, which resulted in a big lead for the Jaguars at halftime.

The Tigers fell behind early and were never able to come out of the hole, falling to Sumter Central 73-52.

“We weren’t able to match their intensity early and it put us in a hole,” DHS head coach Rodney Jackson said. “We have to execute better going forward.”

Trailing by 10 after the first quarter, Demopolis gave up too many easy buckets to the Jaguars in the second quarter. Sumter Central stretched their lead to 25 at the half, 49-24. 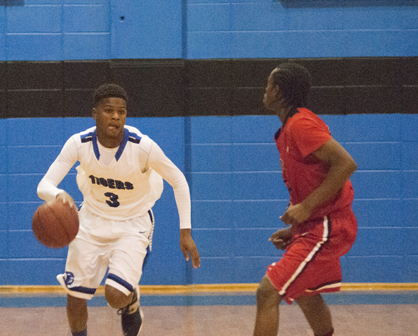 Kiante Jefferies brings the ball up the court for Demopolis against Sumter Central. He finished the game with 15 points to lead his team.

In the second half, Demopolis was able to run their offense better and get some baskets. Early in the fourth quarter, the Tigers had cut the lead down to 13 points, but another Sumter Central run put the Tigers away.

“We looked better in the second half and I’m happy about that,” Jackson said. “We were more aggressive, and we battled.”

Kiante Jefferies led the way for Demopolis with 15 points and Roderick Davis added in 13 of his own. They were the only two Tigers in double figures.

The loss for the Tigers moves them to 7-8 overall and 0-1 in the area.

Demopolis will travel to Uniontown on Saturday to take on R.C. Hatch.