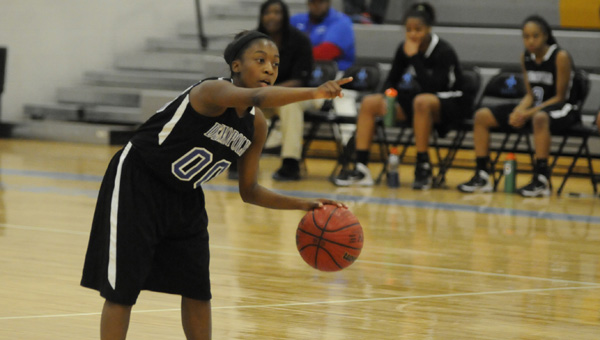 Erica Bennett runs the offense for the Lady Tigers in Tuesday night’s loss to the Selma Saints.

After the clock struck zero, Jackson was presented a basketball signed by all his players, congratulating him on his accomplishment.

“That’s a lot of games,” Jackson said after the game. “I’m blessed. I’m excited. A lot of days away from home. First, I want to give thanks to God because if not for him and having an opportunity to coach and having some good players to work with down through the years [it wouldn’t have been possible].” 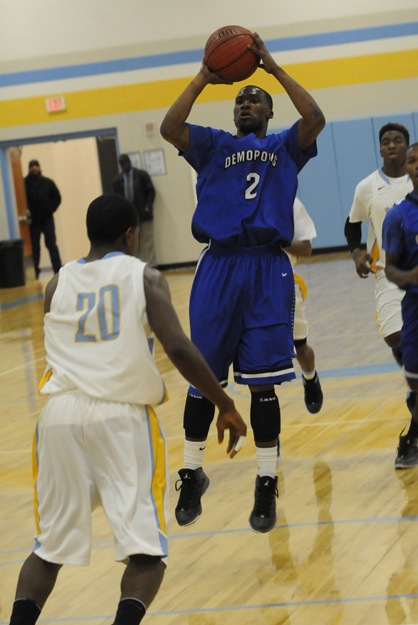 Demopolis came out on fire and stayed with the Saints most of the way. With 53 seconds remaining in the third quarter, the game was tied 37-37, but the Saints went on a 18-5 run to end the game.

Selma used free throws and steals setting up layups to take a 47-41 lead with 4:17 left in the fourth quarter and then started holding the ball and running the clock.

The Tigers were upset that many foul attempts weren’t called during a stretch that saw Selma run valuable time off the clock in the final four minutes.

Demopolis head coach Rodney Jackson was proud of his team’s effort despite the loss that put his team 0-2 in area play.

”All we can do is keep working,” Jackson said. “I just felt like Selma wanted it a little bit more tonight and that is why they got it.”

Kiante Jefferies led the way for Demopolis with 18 points.

The Saints started the game on 14-0 run and never let up, despite the Tigers attempting to inch their way into the game in the third quarter.

Selma’s 26-10 halftime lead was down to only 32-20 with 2:43 remaining in the third quarter, but the Saints locked down defensively to stop the Tigers’ run.

Demopolis scored only nine points in the last ten minutes of the game.

Selma dominated early in the game. The Saints led 16-5 after the first quarter and then stretched their advantage to 26-10 at halftime.

Even after Demopolis started the second half on fire — scoring ten points in six minutes after totaling only ten in the game’s first sixteen minutes — Selma kept its advantage at 36-22 after three quarters.