Luker leaves behind legacy of making boys into men 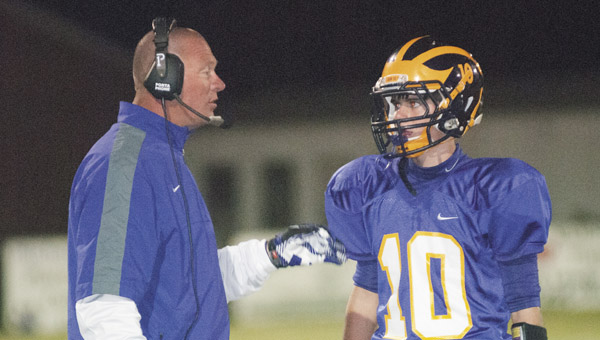 After covering high school football in Marengo County for the last two seasons, I have come to appreciate what good coaching looks like.

Coaching extends beyond the product on the field and the number of championships in the trophy case. You see the result of good coaching when the players are away from the field in a different setting.

After hearing that Stacy Luker is stepping down as head coach of the Sweet Water Bulldogs, my first thought wasn’t about the five championships in his 12 years at the school. My first thought was it will be hard to find a coach that cares as much about his players as Coach Luker does.

During Luker’s tenure at Sweet Water, he brought the program back to the powerhouse that it was under Nolan Atkins’ leadership in the 1960s, 70s and 80s. Luker returned home to Sweet Water in 2002 and immediately began making a name for himself and for Sweet Water in Class 1A football.

In just his third season in 2004, he won a state championship. Then he rattled off three straight from 2006 through 2008, then won his final championship with the Bulldogs in 2010.

Since jumping up to Class 2A in 2012, Luker led the Bulldogs to two region championships and two state semifinal appearances.

His accomplishments on the field speak for themselves, but the product that really matters, the young men, are what make him the great coach that he is.

It will be interesting to see where Luker goes from here. He can take his retirement from the state of Alabama and go out of state to coach, or a larger 5A or 6A school in the state might take a chance to see if his system works at that level.

Wherever he winds up, the young men at that school will benefit from his coaching and teaching.

He knows how to build boys into men, and that is the greatest thing a football coach can do.

LUKER STEPS DOWN AT SWEET WATER

After 12 seasons at the helm of the Sweet Water High School football program, head coach Stacy Luker has decided to step down.

“He’s done an outstanding job at Sweet Water,” Hallmark said. “His record down there is unbelievable.”

Hallmark said Luker has always done things the right way, and it will be hard to replace him.

“I’ve enjoyed working with him over the years, and he will be missed,” he said. “He’s got enough time in to retire, so he might do that and go out of state to coach.”

Hallmark said the school will have a small-scale search committee to name a successor.

“We’ll let the school handle the screening process and let them get someone who they believe will do the job,” he said. “The board has final approval, but I’m confident in the school to make a good decision.”

Luker is staying at the school to finish out the year as the athletic director and a teacher.

Living life with a high motor

Sports from the fan’s perspective