White-tailed does with antlers not uncommon

Most seasoned deer hunters have seen or heard of an antlered doe being harvested. Usually these deer are referred to as hermaphrodites, or to use the common vernacular, “morphodites.” The occurrence of does with antlers poses two interesting questions: 1) how common is the occurrence of antlered does, and 2) are these antlered does truly hermaphrodites? A hermaphrodite is an animal that possess both sexual organs and many of the secondary sex characteristic of males and females of that species. 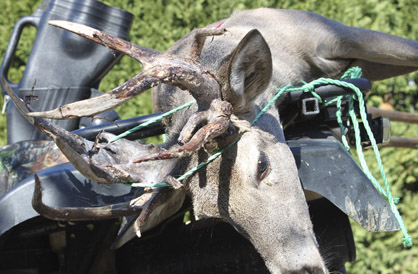 The question regarding white-tailed does with antlers struck my curiosity when a landowner showed me a so-called hermaphrodite that he had harvested during a prior hunting season. As I began to ask around, I realized that most people assumed that all female deer possessing antlers were hermaphrodites. This assumption is incorrect. Antlered females are not as rare as you may think; however, true hermaphrodites are rare. Most female deer possessing antlers are functional females with no abnormalities. However, functional females with antlers don’t usually ever leave the velvet stage of antler growth. This is due to the lack of a surge of testicular hormones, which in males helps result in hardened antlers. In addition, deer with hardened antlers that are assumed to be antlered females are, in fact, likely to be males that suffer from a defect known as cryptorchidism (failure of testes to descend into scrotum).

From 1958-1961, deer researchers J. C. Donaldson and J.K. Doutt implemented a study regarding antlers in female white-tailed deer in Pennsylvania. Throughout four hunting seasons, 47 antlered females were noted. Thirty-one of the 47 were examined and 17 were found to be functional females with velvet antlers. Four were males with undescended testes and polished antlers. One was found to be a true hermaphrodite with velvet antlers. The remaining nine were either unclassified or suffered from an adrenal type tumor.

Obviously, the common characteristic used to distinguish white-tailed bucks from does during the hunting season is the presence or absence of antlers. With that said, it is safe to keep assuming that deer possessing polished antlers are males. If obvious abnormalities or absences of genitalia are witnessed, feel free to contact your nearest Wildlife and Freshwater Fisheries District office to submit the information. In addition, realize that regulations do not typically refer to deer by sex but by “antlered” or “antlerless.” An antlered harvest is an antlered harvest no matter what the sex, but do remember to “note it before you tote it” by filling out your harvest record. You are also encouraged to report the harvest using Alabama’s new Game Check system.

For more information on this subject or other related questions, contact the Alabama Department of Conservation and Natural Resources Wildlife Section.