DMS Robotics recognized by school board 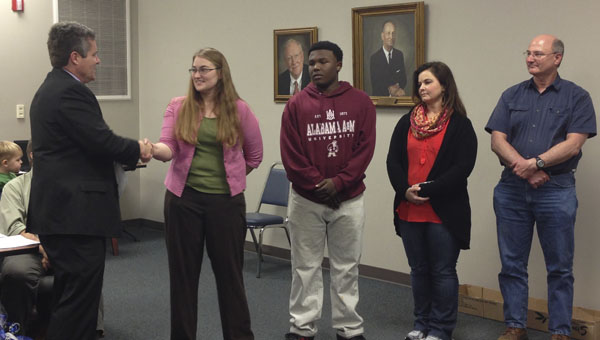 The Demopolis Board of Education recognized the Demopolis Middle School robotics team with a resolution during Monday night’s board meeting.

“What you guys did this year was remarkable,” Griffin said. “I look forward to seeing what kind of success is ahead for the program.”

The robotics team placed second at the Shelton State BEST competition, which earned them a trip to the regional competition at Auburn University. The team placed 26th out of 56 teams at regionals.

Griffin also recognized the school board members as part of Board Member Month being January.

The board approved overnight travel for the U.S. Jones fifth-grade enrichment class to Dauphin Island Sea Lab on Feb. 12-14 as well as for the DHS DECA Club to go to Birmingham for a leadership conference on Feb. 13-14.

The board also approved overnight travel for the Demopolis High School softball team to the Gulf Coast Classic Invitational Tournament in Orange Beach on March 23-26.

In other business, the board approved out-of-state travel for Aretha Littles and lunchroom managers to attend the School Nutrition National Conference in Boston on July 13-16.

The board also approved the payroll and expenditures for the month of December.

Following an executive session, the board approved the following personnel recommendations from Griffin: