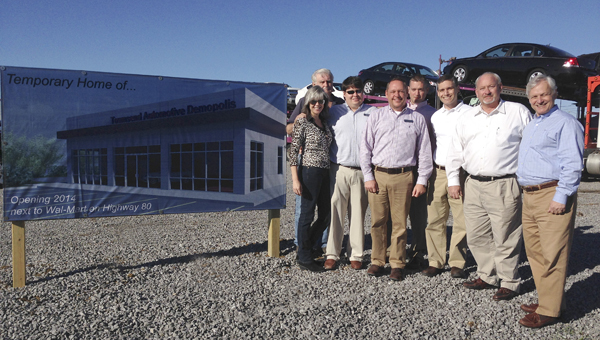 The first vehicles were wheeled unto the temporary lot of Townsend Automotive Demopolis on Tuesday.

The cars, trucks and SUVs will be housed on a gravel lot behind Smoking Jack’s Restaurant until a permanent building a few yards down Highway 80 is completed.

About 30-40 used cars will be on the temporary lot, according to Joe Townsend.

“Whatever sells will be here,” said Joe Townsend. “It’s not going to be one particular model or another but a lot of different kinds, cars and trucks.”

The late Charlie Townsend founded Townsend Ford in Tuscaloosa in 1972 and then added Honda and Nissan/BMW dealerships.

The family business is now run by Charlie’s son Tommy, who was in Demopolis on Tuesday with his wife, Julie, and sons, Joe, Ty and Brody.

Barry Washburn will be the onsite manager. A Greensboro resident, Washburn has been with Townsend for 19 years and worked as a manager for most of those.

Townsend General Manager Tony Tabor is also expected to work in Demopolis during the next few weeks and months.

In addition to car purchases, Townsend also plans to offer car rentals, starting in the next couple of weeks.

They also hope to be on their permanent lot between Walmart and Langley’s Shell by summer. Ben Sherrod owns the temporary lot’s land.