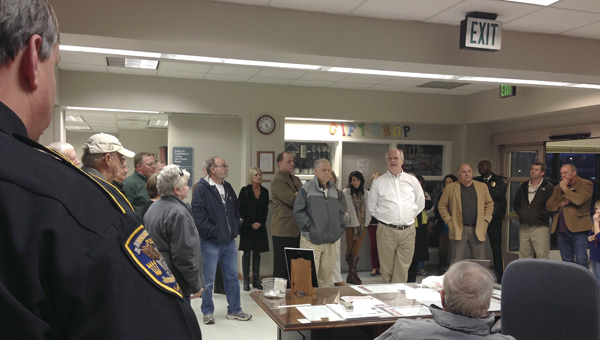 Hospital board member Jay Shows (white shirt, fifth from right) addresses the crowd that came out to the hospital Wednesday evening.

Bryan W. Whitfield Memorial Hospital’s labor and delivery unit may not be closing after all, after a hospital board meeting Wednesday.

The board approved a proposal that would keep labor and delivery open 120 days while a special task force works to find a way to keep the unit open.

The proposal requires the city of Demopolis or Marengo County Commission to together provide $68,000 in funding by Friday, Jan. 24 to help cover the cost of keeping labor and delivery open for 60 additional days, according to hospital administrator Mike Marshall.

The labor and delivery task force will be formed within a week to explore ways the unit can be restructured so that it’s not a cash drain on the hospital.

The group will be required to submit their ideas to the hospital board within 60 days, or by March 15.

After the suggestions are given, the board will have a second meeting within five days to vote on the proposal. If the hospital board can’t pass a plan to save labor and delivery, then the unit would close by Tuesday, April 8.

The proposal said the task force will be comprised of two representatives from the hospital administration, two from the hospital board, two delivery doctors who are nominated by medical staff, one Demopolis City Council member, one Marengo County commissioner and one at-large citizen appointed by the Demopolis Area Chamber of Commerce.

About 50 people came to the hospital Wednesday evening expecting the board to meet there. However, they met instead at Dr. Judy Travis’ office in a closed meeting. 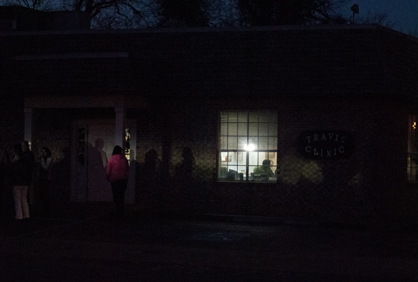 Concerned citizens gather outside Travis Clinic, where the hospital board met Wednesday.

Hospital board member Jay Shows addressed the crowd that gathered at Whitfield. He told them the board faces challenges in keeping labor and delivery open.

“Labor and delivery is one of those departments that will never make money,” Shows said. “We are responsible for the overall health of the hospital and that’s the task we have.”

To keep the unit open, Shows said other revenues streams must be created.

Nearly all of those in attendance wanted the board’s meeting to be open to the public.

“It’s deceptive maneuvering,” said former city councilman Jack Cooley. “Until they allow the city to attend those meetings, I don’t see it getting any better.”

The Demopolis Times checked with the Alabama Press Association’s legal counsel, who said that most healthcare authorities are not subject to the Open Meetings Act due to provisions of the 1982 Alabama Healthcare Authority Act.

About 30 of those present went over to Travis Clinic, where they waited outside until Mayor Mike Grayson delivered news about possibly keeping labor and delivery open 120 days.

Grayson had originally been outside until he and city council members and county commissioners were asked to join the meeting.

“Basically, what we have asked for is a stay of execution, if you will. During this time, we are asking for the city, the county to examine what, if any, options we have to take to the board to keep labor and delivery open,” Grayson said. “Labor and delivery is currently not a profit maker. It may not be in the future. Maybe it’s a break-even, but what has been asked of us is that we have a plan in motion where there are tolerable losses for the hospital.”

County commissioners agreed that something will have to be done soon.

“We will assure you all, we will do everything within our power not to close labor and delivery, but there are some things that are going to have to be done. We are going to talk about that,” said Commissioner Freddie Armstead.

Board member Judy Travis said some way of raising money, perhaps through a foundation, will be required to save labor and delivery long-term. She said the process is already in the works and encouraged everyone to support the task force in their efforts.

“People come and talk but when you ask them to help, they won’t do it,” Travis said. “I think the big thing is a Foundation, like DCH and some others do. If everyone does what they can, that would be great.”