Ross co-owner Jay Russell said this will be the biggest competition they have hosted in Demopolis. 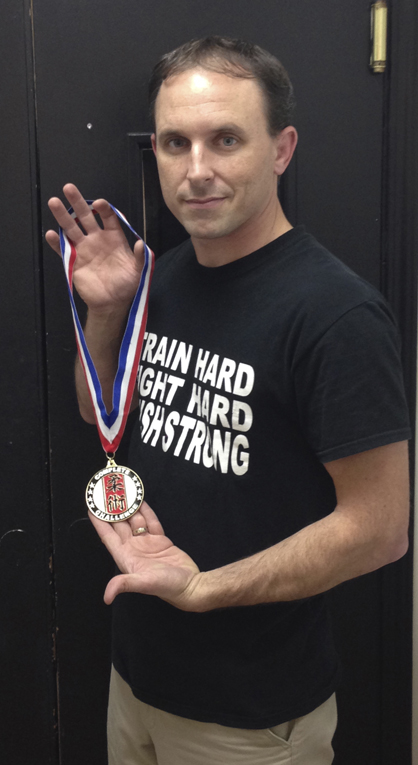 Ross Martial Arts co-owner Jay Russell is shown with a new custom medal that will be awarded during the 2014 Complete Grappling Challenge at the Demopolis High School gymnasium on Saturday, Jan. 25.

“This is the biggest event we’ve had, and I’m excited about our guests,” Russell said. “We’ll have seminars leading up to the tournament to help educate the community about the sport, and it will be a fun experience for everyone.”

Cunningham will host a no-gi seminar on Thursday, Jan. 23 for Ross Martial Arts students only. Then on Friday, there will be mixed martial arts and Muay Thai seminars on Friday at Ross that are open to the public. These seminars will be taught by former professional fighters Salguero and Riley.

On Saturday, Jan. 25, Cunningham will teach a Brazilian Jiu-Jitsu class that’s open to the public at 9 a.m. at Ross, and the 2014 Complete Grappling Challenge will be at DHS at 1 p.m. Saturday.

Russell said spectators are welcome for the tournament, and Ross asks for a $5 donation to get into the tournament to help pay for the guest’s expenses.

“We’ve received a lot of interest from other fighting schools around the state and in Mississippi,” Russell said. “Right now we have one school from Meridian coming and three from north Alabama coming for sure.”

“Absolute shows that the sport is not about size and strength, but about skill,” Russell said. “You can have somebody close to 300 pounds up against somebody that only weights 170, and you can have an outcome that you might not expect.”

Russell also said Ross has been able to purchase custom medals for the tournament.

“We scrimped and saved to be able to purchase them to make the tournament more professional,” Russell said. “We’ll also have trophies for the winners of the absolute competition.”

Anyone who is interested in attending the open seminars or competing in the tournament Saturday can contact Ross Martial Arts at (334) 289-9775.