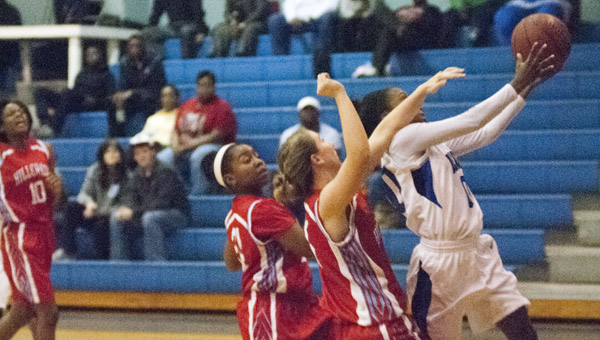 Erica Bennett goes up for a layup for Demopolis High School in Monday night’s game against Hillcrest-Tuscaloosa.

Scoring came at a premium for both Demopolis High School basketball teams Monday night when they hosted Hillcrest-Tuscaloosa.

The Lady Tigers opened the night against the Lady Patriots and a tough stretch through the second and third quarters put them in a hole too deep to dig out of in the fourth quarter.

Only trailing 15-10 after the first quarter, the Lady Patriots were held to just five points in the second quarter and three points in the third quarter. Entering the final frame, the Lady Tigers trailed Hillcrest by 20, 38-18.

In the fourth quarter, though, the baskets started sinking for the Lady Tigers, and they were able to scratch and claw back within striking distance.

Sha’Deitra White led the way for Demopolis in the fourth quarter, pouring in nine points and keeping the defensive pressure on the Hillcrest ball-handlers. The Lady Tigers got within seven, but the Lady Patriots were able to hold them off just enough to hold on for the 42-34 victory.

White led the way for the Lady Tigers in the game with 12 points. Sylvia Clayton was second in scoring with six points.

In the ensuing boys game, it looked similar to the girls game through the first three quarters. The Tigers kept in close in the first quarter and only trailed 16-12 heading into the second quarter. 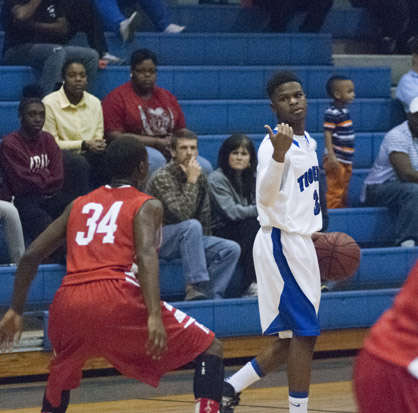 The Patriots held the Tigers to just four points in the second quarter, but Demopolis head coach Rodney Jackson felt like his players got some shots they wanted.

“We got the looks we wanted in the second quarter, but we missed some two-footers and four-footers that should have fallen,” he said. “We’ve have to be able to get the ball in the hole.”

Going into the locker room at halftime, Demopolis trailed Hillcrest 34-16.

Hillcrest outscored the Tigers 23-13 in the third quarter to stretch the lead to 57-29, and Demopolis wasn’t able to close the gap in the fourth.

The Patriots closed out the game to take the win 68-42.

The Tigers hit the road Tuesday to Tuscaloosa to take on Central High School.