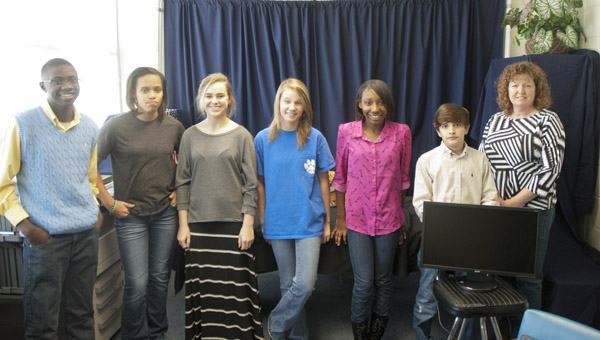 The announcements were live-streamed onto the school’s website, and will be each morning. The shows are also archived for 30 days on the site so parents can go back and watch them later if they don’t get to see them live.

“This will help us better communicate with parents about what’s going on in the school,” DMS principal Blaine Hathcock said. “Right now, it just covers the morning announcements, but we are working to expand it to more of a broadcast as we go forward.” 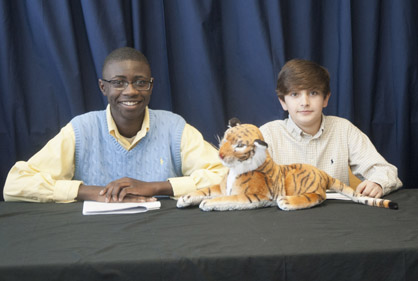 Tyler Ward and Kase Adams are the news anchors for the Demopolis Middle School morning announcements.

The instructor of the class, Ginger Godwin, said she felt like the first announcements went well Tuesday morning.

“I think it went great,” she said. “We’re working to add things to it as we go along like an introduction and a closing. We’re also going to do teacher spotlights and student spotlights.”

Currently, the announcements begin at 8 a.m., but after the first couple weeks of the show, they are hoping to start them at 7:55 a.m. instead.

As of right now, there isn’t a broadcast class at Demopolis High School, but Hathcock said he has spoken with DHS principal Dr. Tony Speegle about it, and that it’s something that could be looked at in the future.

The first announcements show was less than two minutes long, but Hathcock said as it expands, they hope to make it about a seven or eight minute show. Godwin said the class is also looking into getting a backdrop for the set with the Tiger TV logo to make the show feel more like a broadcast.