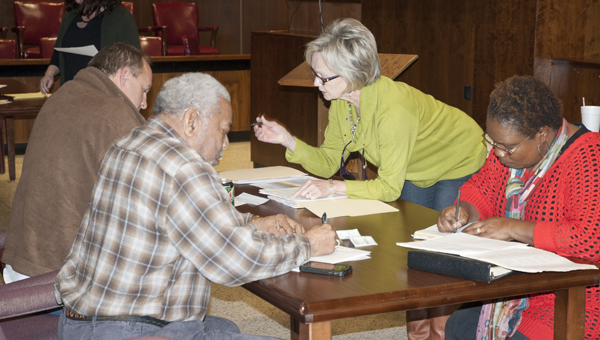 Incumbents Michael Thompson, left, and Freddie Armstead qualify for another term on the Marengo County Commission.

A handful of candidates qualified for local office during a meeting of the Marengo County Democratic Party on Tuesday.

The event formally kicked off local qualifying and saw five candidates complete paperwork to run for office this summer.

•Incumbent Arthur Hopson for Marengo County Board of Education, District 4.

The deadline to qualify was moved up to Feb. 7.

The Alabama Republican Party announced that qualifying for statewide races would begin Monday, Jan. 13 at 9 a.m. at the party’s headquarters in Birmingham. Attempts to reach someone with the Marengo County Republican Party were unsuccessful.

This change will not affect the June 3, 2014 qualifying deadlines for independent candidates and candidates of parties that did not receive more than 20 percent of the entire vote cast in the last general election.