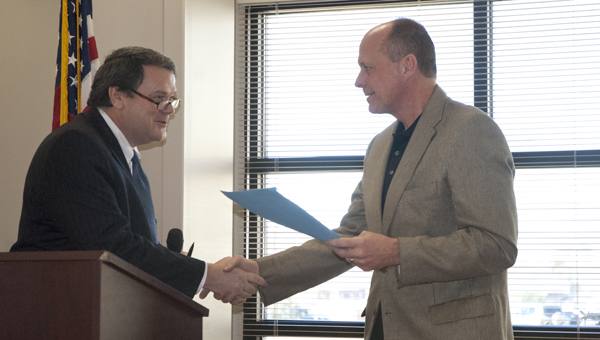 The $163,145 grant will be used to better the health of workers at Whitfield as well as hospitals in Greene, Hale and Sumter counties.

The Delta Regional Authority announced the award last year but were in Demopolis on Wednesday to promote the program.

“We are very excited to implement this program,” said Mike Marshall, Tombigbee Healthcare Authority CEO and administrator. “We work continuously to help our community develop healthier lifestyles. This program will give us the right tools to achieve that goal first at our own hospital, then to other hospitals and, ultimately, businesses in the area.”

The grant will tackle some of the Delta’s biggest health problems, like obesity, diabetes and heart disease.

According to the DRA’s regional health database, deaths from circulatory disease are 16 percent higher and 12 percent more Delta residents battle diabetes compared to the rest of the nation.

“I’ve seen so many people who could have lived longer had they done a little something to promote health. Obesity is at the forefront for a lot of heart disease, hypertension,” said Marcia Pugh, THA’s division director for grants, research and outreach. “What we are doing and promoting is so important. We want to pilot this program to show that it works .”

Given the Delta’s problems with obesity and other health concerns, businesses here bear disproportionate costs related to chronic disease.

The idea is healthier employees are more productive, absent less and cheaper to provide healthcare for.

“A healthy workforce will directly support a healthier economy and thus stronger Delta region,” said Mike Marshall, of the Delta Regional Authority, who shares a name with THA’s administrator.

When the program started last fall, 65 employees were given a health screening to measure things like blood pressure, body mass and cholesterol levels.

Since then, they have been required to exercise at least 10 times a month for 30 minutes, according to Betsy Adams, who serves as program coordinator.

Employees will also be required to attend at least four seminars on topics like stress, nutrition or smoking cessation.

The program will run for 10 months, and there will be additional health assessments at the halfway mark and at the end. There will be incentives and prizes for employees along the way.

“I’m very excited to be working on this program,” Adams said. “I love it and believe in it.”