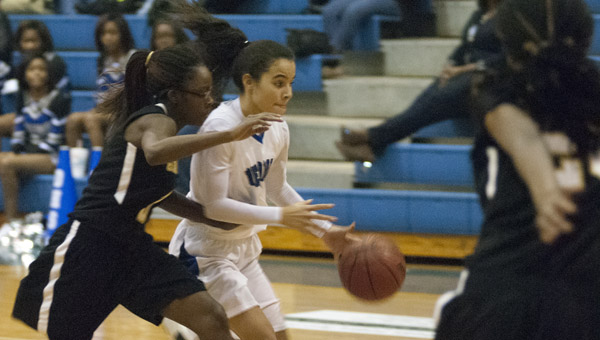 Sylvia Clayton drives to the basket against Greenville.

The Demopolis High School Lady Tigers earned their third area win of the season Thursday night with a win over the Greenville Lady Tigers.

Demopolis jumped out to an early lead and it looked like they would run away with the game, but Sha’Deitra White left the game late in the second quarter with an injury and wasn’t able to return, which hurt Demopolis offensively.

“She’s our main ball-handler, and we struggled the rest of the game,” head coach Tony Pittman said. “We really didn’t respond well to her leaving the game.”

By halftime, Demopolis had built a 15-point lead, 27-12. In the second half, Greenville started creeping back into the game.

“We didn’t do much of anything right in the second half,” Pittman said. “But we survived in the end. Tonight was a true test of our character.”

In the fourth quarter, Greenville had cut the lead down to 42-37 and had all of the momentum. Pittman called a timeout to help his team regroup, and they stretched the lead after that.

“I just told them to get back to the basics, and we were able to lock down on defense and score some baskets,” Pittman said.

Caleb Washington led the way for Demopolis with 16 points, and Erica Bennett added 14. For Greenville, Shaq Rudolph was the leading scorer with 11 points, and Deondra Rudolph had 8 points.

The Demopolis boys could not match the success of the girls, and extended their losing streak to four games with a 57-38 loss.

Greenville drained a couple of threes to open the game, and Demopolis never saw the lead after that. Demopolis only trailed 14-10 after the first quarter, but Greenville stretched the lead to eight by halftime, leading 27-19. 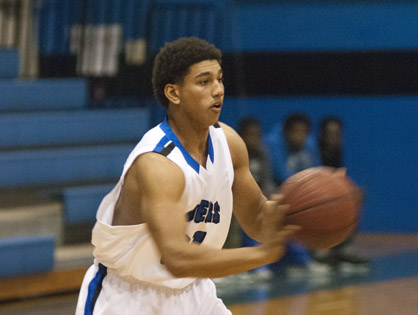 Demetrius Kemp passes the ball off to a teammate against Greenville.

Things didn’t get better for the home team as Greenville came out hot in the third quarter and never looked back. Greenville out-rebounded Demopolis 35-26 in the game.

“They had three big bodies on the inside, and we couldn’t do anything with them,” head coach Rodney Jackson said. “They’re good ball players and they beat us up on the glass tonight. I think that was the difference in the game.”

Jackson said his team needs to keep working and keep battling to try to get back to winning. 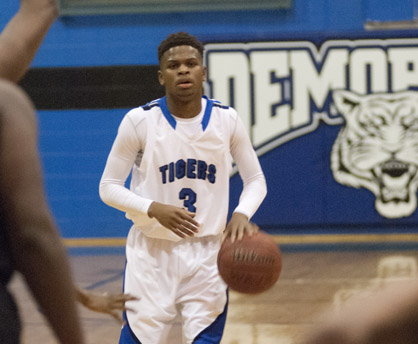 Kiante Jefferies brings the ball up the court for Demopolis.

Kiante Jefferies was the leading scorer for Demopolis with 11 points and Roderick Davis had 8 of his own. DaBryant Crenshaw led the way for Greenville with 21 points and Zac Smith had 11 points.