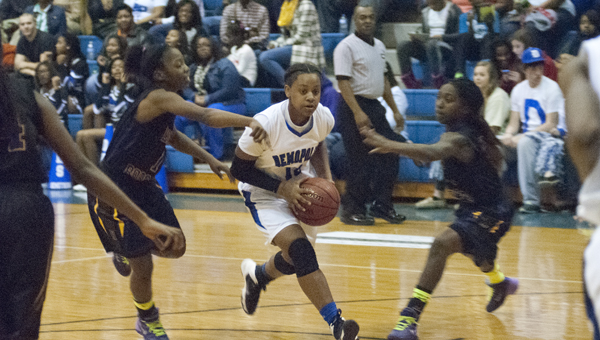 Sha’Deitra White drives into the lane to the basket for Demopolis on Friday against R.C. Hatch.

Erica Bennett shined for the Demopolis Lady Tigers on Friday against R.C. Hatch. She scored 19 points and added three rebounds, five assists and five steals to help her team to a 49-31 win over the Bobcats.

“She had a good night for us,” head coach Tony Pittman said. “She plays with high intensity on defense, and that gets the other players going as well, and tonight she was knocking down shots on the offensive end.”

Demopolis took an early lead in the game and never looked back. They led 29-12 at halftime and slowed down the pace in the second half to finish off the Bobcats.

Ivery Moore finished the game with 13 points, and Sha’Deitra White finished with six points and seven rebounds. Darneshia Harris had 10 rebounds in the game as well.

One of the leading scorers for Demopolis, Caleb Washington, will miss the rest of the season with an injury, which changes the identity of the Lady Tigers.

“It definitely changes our identity, but we just have to move someone else into that position,” Pittman said. “That’s a big loss for us, but it will help us open up the floor more on offense.”

The win moves the Lady Tigers to 13-9 on the season.

In the boys game, Demopolis was able to hang around with the Bobcats, but they never could make the run they needed.

DJ Howell had a big night for the Tigers, scoring 21 points and grabbing nine rebounds, but it wasn’t enough to give his team a win.

Hatch led 20-18 after the first quarter, but they were able to pull away in the second quarter. 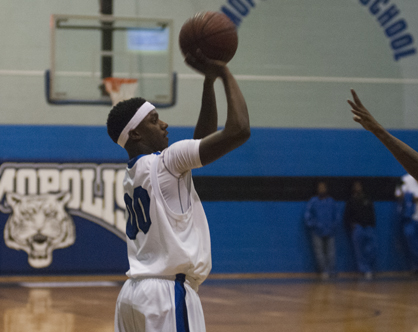 Tyler Perkins takes a jumpshot for Demopolis against R.C. Hatch.

By halftime, the Bobcats led 40-29. Turnovers and missed opportunities led to a 56-44 deficit for Demopolis after the third quarter, and the 12 points proved to be an insurmountable lead in the fourth.

The Bobcats came away with a 72-57 win over Demopolis.

In addition to Howell, Demetrius Kemp and Roderick Davis finished in double figures with 10 points each. Kemp also had 10 rebounds in the game.

The loss puts Demopolis at 8-15 overall. The Tigers will travel to Sumter Central on Monday before returning home to face Selma on Tuesday. The final home game of the season and senior night will be Thursday against Pickens County.