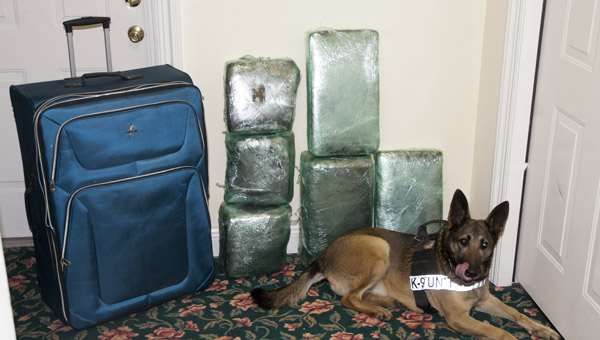 The 17th Judicial Drug Task Force, along with their K-9 Suza (shown), seized 67 pounds of marijuana during a traffic stop on Interstate 20/59.

The task force made the initial stop of a passenger bus at 2 a.m. Friday at the 52 mile marker on Interstate 20/59. The marijuana was found in a suitcase in the cargo hold of the bus.

“I’m proud of our interdiction agents,” Task Force Commander Clint Sumlin said. “They put in countless hours, day and night, and that’s what has made us successful.”

The Task Force’s drug K-9, Suza, alerted the agents as to where the drugs were. Sumlin said the marijuana would sell for between $500 and $700 per pound, totaling around $40,000.

The 17th Judicial Drug Task Force was started in 2011 by District Attorney Greg Griggers. They work to stop drug trafficking and other illegal activity in Marengo, Sumter and Greene counties.