The southern half of Alabama is expected to receive snow and a wintry mix beginning as early as 10 a.m. Tuesday.

Marengo County EMA Director Kevin McKinney said he had a briefing with the National Weather Service on Monday morning about the winter weather.

“Our information is that we should start seeing snow between 10 and noon Tuesday,” he said. “Right now, it’s expected to continue into early Wednesday morning before daylight.”

McKinney said the timing depends on the speed of the storm. 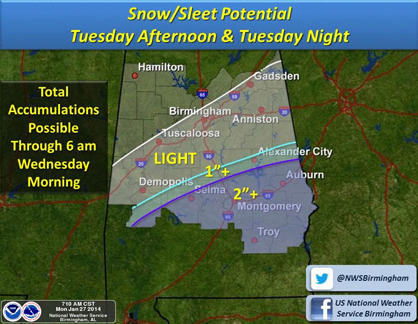 “The amount of snow all depends on how far north the storm comes,” he said. “And the timing really depends on the speed. It could get here before 10 if it picks up some speed, or it could be later if it drags its feet.”

The southern part of Marengo County, around the Highway 10 corridor, is expected to receive between two and two-and-a-half inches of snow from Tuesday into Wednesday. The northern part of the county, including Demopolis, is expected to get between a half-inch and an inch of snow during the same time period.

McKinney said that because of low temperatures throughout the day Wednesday, any accumulation wouldn’t clear out until Thursday afternoon.

“Due to low temperatures Wednesday that aren’t likely to get above freezing, the snow and ice won’t clear until probably late Thursday,” he said. “This could be a two or two-and-a-half day event as far as the accumulation sticking around.”

He added that there is a possibility for travel problems, and that people should make sure they have what they need at home for a couple of days in case travel is difficult.

“People should prepare for an extended time of difficult travel,” he said. “I think travel will be limited from Tuesday evening through around noon on Thursday.”

A Winter Storm Watch will be in effect beginning at 9 a.m. Tuesday continuing through 6 a.m. Wednesday.

The low temperature for Tuesday and Wednesday is expected to be around 18 degrees.