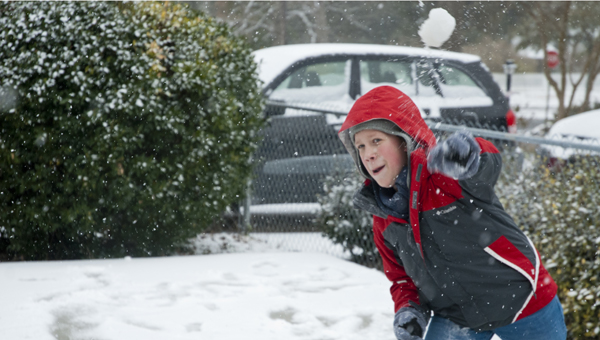 Joseph Barnes enjoys a snowball fight with his family and friend J.C. McVay.

All county roads in Marengo County have been closed due to bad road conditions from the winter weather.

The Marengo County Sheriff’s Office said motorists are advised to stay off of roadways, unless in case of an emergency.

Sleet and freezing rain started in Demopolis before sunrise Tuesday, which was several hours before it was expected. Marengo County EMA Director Kevin McKinney said the early-morning ice Tuesday was unexpected, so it makes it difficult to predict what is going to happen Wednesday.

“We didn’t see that coming,” he said. “We weren’t expecting anything until around 10 a.m., and even then, it was snow and not ice.” 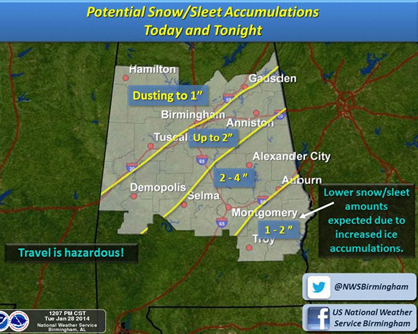 The National Weather Service in Birmingham predicts that Demopolis and Marengo County are expected to receive up to two inches of snow and sleet accumulation Tuesday.

With the early start to the weather, Demopolis Police Chief Tommie Reese has encouraged citizens to stay off the roads as much as possible. He said there had been several accidents around town before noon Tuesday.

“We’re encouraging everyone to stay put as much as possible,” he said. “If you don’t have to be on the roads, please don’t be.”

In addition to the school closure Tuesday, Regions Bank was also closed all day, and Robertson Banking Company closed at 11 a.m. Demopolis City Schools and Marengo County Schools have also decided to close on Wednesday, as the temperature is not expected to rise much above freezing to clear away any accumulation until Thursday.

“With the temperature staying below freezing, I don’t see any way we can get the buses out on the roads Wednesday,” Marengo County Superintendent Luke Hallmark said.

“There won’t be any new accumulation after Tuesday night and early Wednesday morning,” McKinney said. “The temperature just isn’t going to be high enough to clear away any ice on the roads.”

The National Weather Service in Birmingham has issued a winter storm warning in effect until 6 a.m. Wednesday, which includes Marengo County. They said snow, sleet and freezing rain accumulation is possible through Tuesday evening, and the heaviest activity for the storm will occur between 3-9 p.m. The area with the greatest potential for significant snow accumulation is near and south of a line from Dixons Mills to Selma to Equality to Stroud. The area for the best chance of ice accumulation is near and south of a line from Fort Deposit to Union Springs to Smiths Station. Accumulations of one to three inches of a combination of snow and sleet are possible, and ice accumulations will range from one-tenth of an inch to around a quarter of an inch.

The state Emergency Management Agency in Clanton included Marengo County in a request for people to stay off of the roads as much as possible.